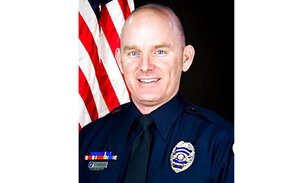 GILBERT, Ariz. (AP) — A suspect in a stolen car struck and killed one officer and critically injured another during a wild chase involving multiple law enforcement agencies outside Phoenix, authorities said Thursday.

“It is with heavy hearts that we announce the passing of Chandler Police Officer Christopher Farrar,” his department tweeted.

Farrar was an 18-year veteran of the Chandler Police Department, the tweet said.

Multiple law enforcement agencies became involved in tracking the suspect. The incident began in Pinal County and ended at the SanTan Motorplex in Gilbert, according to ABC15 news.

A Gilbert Police officer was hospitalized in critical condition, the station reported.

The station also reported that police said the suspect busted through the gates at the Chandler airport, causing a closure of the airport, and then continued onto a highway into Gilbert before trying to flee from the vehicle at the auto dealership.