As employers struggle to fill jobs, teens come to the rescue 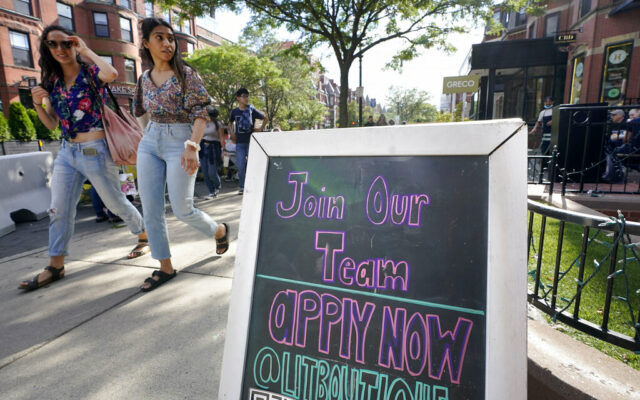 Pedestrians walk past a sign inviting people to apply for employment at a shop in Boston's fashionable Newbury Street neighborhood, Monday, July 5, 2021. As the U.S. economy bounds back with unexpected speed from the pandemic recession and customer demand intensifies, high school-age kids are filling jobs that older workers can’t — or won’t. (AP Photo/Steven Senne)

WASHINGTON (AP) — The owners of restaurants, amusement parks and retail shops, many of them desperate for workers, are sounding an unusual note of gratitude this summer:

As the U.S. economy bounds back with unexpected speed from the pandemic recession and customer demand intensifies, high school-age kids are filling jobs that older workers can’t — or won’t.

The result is that teens who are willing to bus restaurant tables or serve as water-park lifeguards are commanding $15, $17 or more an hour, plus bonuses in some instances or money to help pay for school classes. The trend marks a shift from the period after the 2007-2009 Great Recession, when older workers often took such jobs and teens were sometimes squeezed out.

The time, an acute labor shortage, especially at restaurants, tourism and entertainment businesses, has made teenage workers highly popular again.

“We’re very thankful they are here,’’ says Akash Kapoor, CEO of Curry Up Now. Fifty teenagers are working this summer at his five San Francisco-area Indian street food restaurants, up from only about a dozen last year. “We may not be open if they weren’t here. We need bodies.”

The proportion of Americans ages 16-19 who are working is higher than it’s been in years: In May, 33.2% of them had jobs, the highest such percentage since 2008. Though the figure dipped to 31.9% in June, the Labor Department reported Friday, that is still higher than it was before the pandemic devastated the economy last spring.

At the Cattivella Italian restaurant in Denver, for instance, Harry Hittle, 16, is earning up to $22.50 an hour, including tips, from his job clearing restaurant tables. He’s used the windfall to buy gas and insurance for his car and has splurged on a road bike and an electric guitar.

“There’s never been a better time to apply for a job if you’re a teen,” says Mathieu Stevenson, CEO of Snagajob, an online job site for hourly work.

Consider the findings of Neeta Fogg, Paul Harrington and Ishwar Khatiwada, researchers at Drexel University’s Center for Labor Markets and Policy who issue an annual forecast for the teenage summer job market. This year, they predict, will be the best summer for teenage lifeguards, ice cream scoopers and sales clerks since 2008; 31.5% of 16- to 19-year-olds will have jobs.

Teenage employment had been on a long slide, leading many analysts to lament the end of summertime jobs that gave teens work experience and a chance to mingle with colleagues and customers from varying backgrounds.

In August 1978, 50% of teenagers were working, according to the U.S. Labor Department. Their employment rate hasn’t been that high since. The figure began a long slide in 2000 and fell especially steeply during the Great Recession. The eruption of coronavirus produced a new low: Only 26.3% of teens had jobs last summer, according to the Drexel researchers.

The long-term drop in teen employment has reflected both broad economic shifts and personal choices. The U.S. economy includes fewer low-skill, entry-level jobs — ready-made for teens — than it did in the 1970s and 1980s. And such jobs that do remain have been increasingly likely to be taken by older workers, many of them foreign born.

In addition, teens from affluent families, eager to secure admission to top universities, have for years chosen summer academic programs over jobs or have pursued ambitious volunteer work in hopes of distinguishing their applications for college. Others have spent their summers playing competitive sports.

This summer, things are rather different. After collapsing last spring, the economy has rebounded much faster than expected. Restaurants, bars, retail shops and amusement parks have been overwhelmed by pent-up demand from consumers who had mostly hunkered down for a year or more.

Now, those businesses need employees to handle the influx and are scrambling to find enough. The vaccine rollout was just starting in April and May, when employers typically start hiring for summer. Some of these businesses delayed their hiring decisions, unsure whether or when the economy would fully reopen.

Foreign workers, brought in on J-1 work-and-study visas, typically filled many such summer jobs. But President Donald Trump suspended those visas as a coronavirus precaution, and the number of U.S.-issued J-1 visas tumbled 69% in the fiscal 2020 year — to 108,510, from 353,279 the year before.

In past years, for example, foreigners visiting the U.S. on visas took filled 180 summer jobs at Big Kahuna’s water park in Destin, Florida. Last year, there were just three. This year, eight. Desperate to attract local teens, Big Kahuna’s, which is owned by Boomers Parks, is now paying $12 an hour, up from less than $10 an hour in past years.

Compounding the labor squeeze, many older Americans have been slow to respond to a record number of job openings. Some have lingering health concerns or trouble arranging or affording child care at a time when schools are transitioning from remote to in-person learning. Other adults may have been discouraged from seeking work because of generous federal unemployment benefits, though many states have dropped these benefits, and they will end nationwide on Sept. 6.

So businesses are offering signing bonuses and whatever else they can to hire teens in a hurry.

Wendy’s, which relies on teens to salt fries and ring up orders, added a way for applicants to apply for a job through their smartphones. Applicants are screened using artificial intelligence, which gets them to an interview faster than if they uploaded a resume. The idea is to hire them before another employer can.

“Speed is critical,” said Randy Pianin, CEO of JAE Restaurant Group, a franchisee that owns 220 Wendy’s locations. As a perk, JAE is offering workers a way to get hold of some of their pay the day after they earn it, Pianin said, instead of having to wait two weeks for a paycheck.

Boomers Parks has raised pay at the eight amusement parks it owns and is offering bonuses of up to $50 a week for some teen workers who stay through the summer, CEO Tim Murphy said. With fewer people seemingly willing to take the jobs, Murphy said, competition for workers is fierce.

At its Sahara Sam’s water park in West Berlin, New Jersey, the company lowered its minimum working age to 15 from 16 to try to recruit a larger pool of candidates.

Johnathon Miller thought he would need to wait until August, when he turned 16, to start working. But when he heard about a lowered age limit at Sahara Sam’s, he applied — and got the job. He will soon be a lifeguard, watching over the lazy river for $15 an hour, a couple of bucks more an hour than Sahara Sam’s used to pay.

“I’m looking forward to working,” said Miller, who lives in Woolwich Township, New Jersey — so much so that he got a friend interested, too: “He was like, ‘Whoa, they are hiring at (age) 15?’ ”

At Curry Up Now, the restaurant pays $2 an hour above the minimum wage, which is $15 or more an hour, depending on the Bay Area location. The chain is also offering a fund for teens to pay for classes or books, as well as free Zoom classes on how to manage money.

Kapoor concedes that young hires require restaurant training and might not stick around for long. But there are advantages to having teens on staff. They are typically inclined to persuade their friends to work or eat there, giving Curry Up Now a stream of future workers and customers. And they have updated the restaurant’s music, adding more songs from the ’80s and ‘90s as well as tunes from India and the Middle East.

All that said, the revival of teen employment might not last. The pre-pandemic trend toward fewer young workers at restaurants and entertainment venues could reassert itself if the economy’s labor shortages are eventually resolved.

Still, Harrington, director of Drexel’s labor markets center, notes that “employers have moved down the labor queue as the labor supply of adults has become more constrained.’’

If the economic recovery continues to reduce unemployment, and if federal policymakers continue to restrict the influx of low-skilled foreign workers, “then the chances for sustained growth in teen employment rates are good,’’ Harrington said.