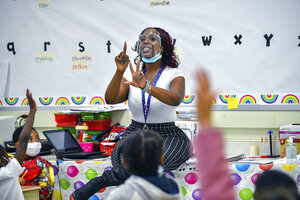 As some of the last statewide school mask mandates near an end, responsibility is shifting back to local leaders, who are caught in the middle of one of the most divisive issues of the pandemic.

In the hours after Connecticut’s governor announced its mandate would end later this month, the school superintendent in Cheshire was peppered Monday with messages from families who feel masks are critical for protecting students and others who have long been opposed.

The issue of masks in schools has been so contentious in much of the country that school board meetings have devolved into shouting matches and arrests, superintendents have seen protesters outside their homes, and slates of candidates — pro- and anti-mask — have sought school board seats in an attempt to shape policies.

“Unfortunately, this is an issue where you are not going to make everybody happy,” Superintendent Jeffrey Solan said. “We can’t allow those individual passions to decide the debate.”

If the decision had to be made right away, Solan said, his district in New Haven’s suburbs would not be mask-optional, based on metrics developed with local health officials, including vaccination and infection rates.

Some school officials around the country welcomed the state-imposed mandates to spare them from having to make unpopular decisions, especially early in the pandemic. But many superintendents say they now have the tools to decide whether masks should be required, and they welcome the ability to adapt as needed.

The governors of Connecticut, Delaware, New Jersey and Oregon this week announced plans to lift mandates in schools by the end of February or March, as COVID-19′s omicron surge fades. State leaders added Massachusetts to the list on Wednesday.

The states are among a dozen that have kept mask mandates in schools as others have dropped them, according to the nonpartisan National Academy for State Health Policy.

The Centers for Disease Control and Prevention still recommends masks for teachers and staff inside buildings, leaving district leaders to weigh the federal guidance against what they have seen in their own schools and heard from the parents and teachers.

Some districts including Philadelphia; Wichita, Kansas; and Albuquerque, New Mexico; have continued to require masks despite the end of state mandates.

Many others have made them optional.

West Baton Rouge, Louisiana, Superintendent Wesley Watts said it was comforting at the outset that all schools required masks, but that was then. His school district stopped requiring masks at the end of October, once school systems were allowed to opt out of a state mandate as long as they enforced quarantines in line with CDC recommendations.

“Just knowing the pulse of our community, they were ready for it,” Watts said.

In his his Illinois community — just 20 minutes from Paducah, Kentucky, and more than five hours from Chicago — Stafford said hardly anyone still wears a mask. That, along with data showing minimal spread in district schools and the challenge of masks muffling voices and hiding facial cues in class, persuaded him to shift to a mask-optional policy.

“On the other side of that coin, you also have those who suffer from autoimmune disorders, other extenuating health circumstances, and that has to be weighed in the balance of this global pandemic and the response to it as well,” Stafford said, “and so it’s not an easy decision or a light decision.”

“What we’ve seen in this country is that the pandemic and the level of infections is very much dependent on where you are,” he said. “If you create a blanket situation that says everyone is going to have to do this, wear a mask or not wear of mask, you’re not taking into consideration the differences that exist within your own region.”

In a number of states, including Maryland and Virginia, he said, districts have been dropping and reimposing mask requirements to adapt to the latest virus numbers.

So how do superintendents deal with complaints from all sides about masks in schools?

In Oregon, he said, three superintendents have been fired for implementing a state mask mandate because school boards did not want them to be required.

In New York, officials have yet to announce whether the current Feb. 21 end date for the state’s school mask mandate will hold.

A group of 13 rural New York superintendents has asked that local control be fully restored “because the needs of each region differ, and we are fully capable of navigating the remainder of the school year with input from our local (departments of health) as needed.”

New York Health Commissioner Mary Bassett said Tuesday that a decision had yet to be made on when to end the mandate while acknowledging “there is no doubt that we are in sustained downturn.”

“That’s a tough decision for anybody,” Stafford said, “whether it be the governor’s office, the local board of education, the local health department.”