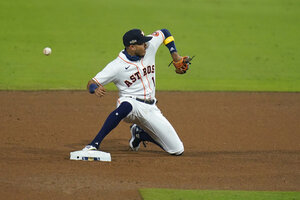 With Altuve atoning for his poor defense this series, the Astros finally got their offense going after being pushed to the brink of a sweep.

Seeking their third pennant in four seasons, they trail 3-1 going into Game 5 on Thursday afternoon.

The Rays remain one win from going to the World Series for the second time in franchise history.