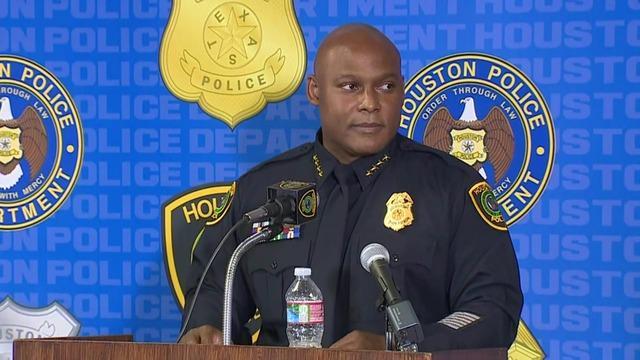 ▶ Watch Video: Community demands answers after Astroworld tragedy
An Astroworld Festival security guard who was previously thought to have been pricked in the neck during the event — leading authorities to look into a possible drug-spiking incident — was actually hit in the head, Houston police chief Troy Finner clarified Wednesday.

In a news conference, Finner said medical personnel at the event told police the security guard had felt a prick in his neck before arriving in the medical tent. However, authorities have since spoken with the man who confirmed that he was hit in the head and woke up in the tent. No one injected him with drugs, Finner said.

The police chief declined to establish a definitive timeline of how the deadly chaos unfolded, saying it was too early in the investigation to know for sure. However, he said police told personnel in charge of the event to end the show when at least one person was receiving CPR.

The Houston Police Department and the FBI are investigating the incident, which Finner estimated could take weeks or months to complete. They are working to review video footage and interview victims as well as witnesses. Finner said Wednesday that he does not believe an independent investigation is necessary at this point.

He also clarified that it was Harris County, not the city of Houston, that sanctioned the music festival. However, the police chief said his goal was not to blame anyone.

“There’s nothing more important than the families,” Finner said. “I want us all — as a city, as a nation — to pray for these families. I can’t imagine what they’re going through right now.”

What we know about the tragedy

The incident occurred on the first night of the third installment of the Astroworld music festival, with more than 50,000 concertgoers in attendance. As rapper Travis Scott performed, the crowd pushed toward the front of the stage, causing panic and resulting in hundreds of injuries. Twenty-five people were rushed to local hospitals, 11 of whom suffered cardiac arrest, according to police.

At least eight people were killed, including two teenagers, in Friday night’s tragedy. Their causes of death are not yet known. Meanwhile, two people, including a 9-year-old boy, remain in critical condition.

The event ended early, and the second day of the festival was canceled.

Finner said 25 people were arrested during the event — 23 for trespassing, one for marijuana possession and one for public intoxication.

The festival had ample security, with 530 Houston police officers and 755 additional private security officers from Live Nation inside NRG Park for the festival, according to Finner. The police chief praised their swift response to the incident.

Scott has pledged to pay for the funeral expenses of the eight victims and said he was “absolutely devastated by what took place.”

In an Instagram video, Scott said he didn’t know the severity of the situation while he was performing. “My fans really mean the world to me and I always just really wanna leave them with a positive experience,” the rapper said. “Anytime I could make out, you know, anything that’s going on — I stop the show and help them get the help they need.”

Several concertgoers have filed lawsuits against Scott and Live Nation, including the family of the 9-year-old boy in critical condition and 35-year-old Manuel Souza who, his attorneys said, was seriously hurt during the chaos.

Earlier Wednesday, attorneys for Souza announced the findings of a two-day investigation into the music festival site.

Kherkher Garcia, LLP sent a team of inspectors to the NRG Park on Monday and Tuesday. In a statement on Wednesday, the firm said it found that the “pit” in front of the stage where Scott and others performed was “completely inadequate in size and unnecessary cordoned off by ‘moat’ barricades that were ineffective in crowd control” and that medical treatment areas were “not readily accessible by the crowd.”

It also claims that the “security and medical personnel at the overall festival site were completely inadequate based on the size of the premises and the number of concertgoers.”

“This kind of catastrophe is never supposed to happen when companies organizing these events do what they’re supposed to do,” said Jesus Garcia, the firm’s founding partner. “We aim to hold the defendants accountable, seek maximum justice for our clients, and help prevent a tragedy like this from happening again.”