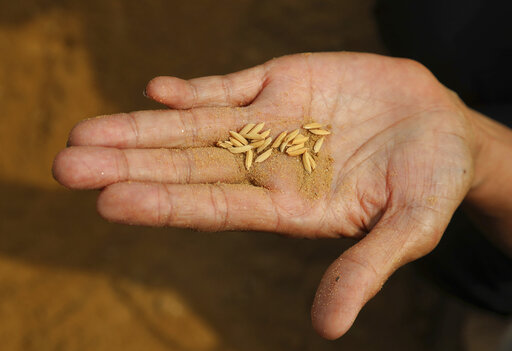 A person shows rice seeds following royal ploughing at the royal ploughing ceremony in Bangkok, Thailand, Thursday, May 9, 2019. The seeds are believed to bring good luck. The annual ceremony marks the beginning of the rice growing season. (AP Photo/Sakchai Lalit)

Over the past few weeks, at least 187 Texans received an unsolicited package of mystery seeds in the mail that appeared to have come from China. Meanwhile, all 50 states have issued warnings about similar bundles of unknown seeds being sent to residents from overseas, causing concern among government officials and agricultural leaders.

Texas Department of Agriculture (TDA) Commissioner Sid Miller said several of the seeds that have been sent to Texas were determined to be agricultural and gardening seeds, as well as some weeds. The most pressing concern is that some of the seeds could be noxious weeds or other invasive species that could hurt Texas’ agricultural system, he said.

“I am urging folks to take this matter seriously,” Miller said in a statement. “An invasive plant species might not sound threatening, but these small invaders could destroy Texas agriculture. TDA has been working closely with USDA to analyze these unknown seeds so we can protect Texas residents.”

Miller said that anyone who receives the seeds should leave them in their packaging and contact the department immediately. They shouldn’t be thrown away either, he said, because then they could grow in the landfill. Department of Agriculture staff members are picking up every package reported for inspection.

Intentionally keeping or planting the seeds would be illegal, Miller said., because they are an illegal product.

“These are highly illegal. Don’t plant them. Don’t mess around with them,” Miller said. “Treat them like they’re radioactive or like Kryptonite.”

It’s illegal to send seeds to the U.S. from overseas without proper permits and many of the packages were mislabeled as containing jewelry, Miller said.

While the seeds are still being tested in labs and undergoing investigation, Miller said there is a “pretty good possibility” that they are a part of a brushing scam, when a vendor attempts to bolster product ratings by shipping products unprompted and then writing a review using that person’s name. The lab should have results in seven to 10 days, Miller said.

In an interview with The Texas Tribune, Miller attempted to tie the seeds to the coronavirus pandemic.

“I’m getting sick and tired of these surprises coming out of China. First, it was a China virus, then it was murder hornets. Then we had closed down their embassy because of espionage and spying,” Miller said. “And now we, you know, we’ve got all these mysterious seeds.”

The phrase “China virus,” used by President Donald Trump and defended by politicians including U.S. Sen. John Cornyn, has been criticized as racist and anti-Chinese.