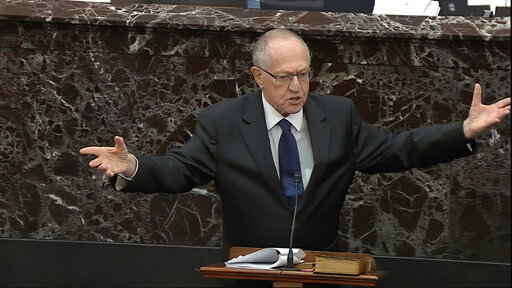 In this image from video, Alan Dershowitz, an attorney for President Donald Trump, speaks during the impeachment trial against Trump in the Senate at the U.S. Capitol in Washington, Monday, Jan. 27, 2020. (Senate Television via AP)

FORT LAUDERDALE, Fla. (AP) — Attorney Alan Dershowitz is suing CNN for $300 million, alleging it slandered and libeled him through its editing of a comment he made to the Senate while defending President Donald Trump during his impeachment trial, saying the revision made it falsely appear he “had lost his mind.”

Dershowitz, who was part of the legal team defending the president during the trial that ended with Trump’s Feb. 5 acquittal, filed the federal lawsuit Tuesday in South Florida.

The lawsuit centers around comments Dershowitz, 82, made Jan. 29 in response to a question by Sen. Ted Cruz, a Texas Republican. It involved whether an allegation that Trump wanted to trade Ukrainian political favors in return for U.S. military aid could be considered grounds for finding the president guilty and removed from office.

The former Harvard Law School professor and frequent media commentator responded, “the only thing that would make a quid pro quo unlawful is if the quo were somehow illegal” — and providing arms to Ukraine wasn’t illegal.

He contends that by playing only the second segment “over and over again” without the first part, CNN made it appear he was arguing a president could avoid impeachment for illegal acts as long as he believed his reelection was in the nation’s best interest. That notion is “preposterous and foolish on its face,” Dershowitz argues in his lawsuit.

“That was the point: to falsely paint Professor Dershowitz as a constitutional scholar and intellect who was lost his mind,” the lawsuit argues.

CNN did not immediately return a call Wednesday seeking comment.

As a public figure, Dershowitz faces difficult hurdles in winning a libel suit. Not only must Dershowitz show CNN’s editing falsified his statements and that act and the statements it caused damaged his reputation, he would also have to show CNN knew its statements were false or were made with reckless disregard for the truth.

Dershowitz is demanding a jury trial.