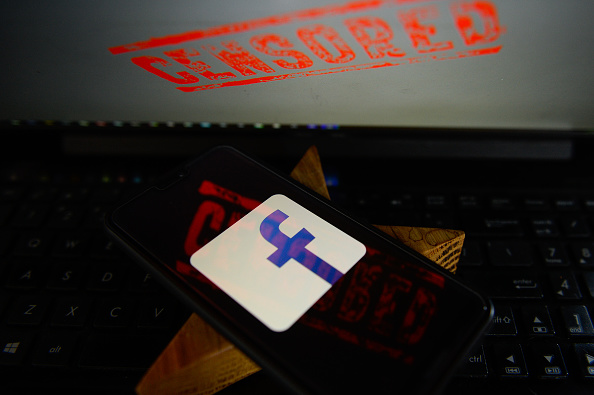 KRAKOW, POLAND - 2018/08/17: In this photo illustration, the Facebook Lite logo is seen on a Huawei smartphone with the word censored on a laptop monitor. (Photo Illustration by Omar Marques/SOPA Images/SOPA Images/LightRocket via Getty Images)

SAN ANTONIO (KTSA News) — Texas Attorney General Ken Paxton is claiming a victory in court in the battle over free speech and censorship in social media.

The Fifth Circuit Court of Appeals in New Orleans is overturning a federal court’s ruling that stopped a Texas law preventing social media networks from censoring users based on their political viewpoints from going into effect. Moving forward, the law creates numerous requirements for platforms to disclose to the public how they operate and also how users can file complaints regarding censorship decisions.

“Big Tech’s reign of endless censorship and their suppression of conservative viewpoints is coming to an end,” said Attorney General Paxton. “These massive corporate entities cannot continue to go unchecked as they silence the voices of millions of Americans. HB 20 was designed to protect every Texan wanting to fully express his or her First Amendment rights, and the court made the right decision in upholding the law.”

The Fifth Circuit is upholding the state’s authority to stop discrimination on social media platforms and also ruled that anit-censorship laws, such as HB 20, are consistent with the First Amendment because they regulate the company’s conduct, not their speech.

As the Court stated in its opinion: “The implications of the [Big Tech] platforms’ argument are staggering. On the platforms’ view, email providers, mobile phone companies, and banks could cancel the accounts of anyone who sends an email, makes a phone call, or spends money in support of a disfavored political party, candidate, or business. . . . Today we reject the idea that corporations have a freewheeling First Amendment right to censor what people say.”