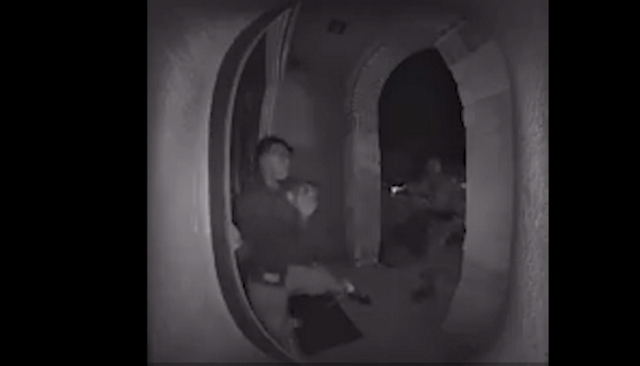 SAN ANTONIO (KTSA News) – Attorneys representing 18-year-old Zekee Rayford say their client feared for his life after being “violently arrested” following a traffic violation.  Rayford is accused of running a red light on his way home around 11:40 pm Monday.

Schertz officers followed him as he pulled into his driveway.  Surveillance videos shows Rayford getting out of the car with his arms raised.  He runs to the front door  as the officers chase him and he yells, “Dad, Dad, Dad .”

Surveillance video shows the officers kicking Rayford and tasing him as they try to apprehend him.

You can see the video released by the family here.

“Unfortunately, this is yet another tragic example of a minor traffic violation resulting in a Black man in this country fearing for his life,” says Attorney Daryl K. Washington. “This traumatic interaction was unnecessarily caused by the unprofessional demeanor and actions of police officers who took an oath to serve and protect. It was extremely difficult watching Zekee plead for his father to save him.”

Attorney Tess House says there are discrepancies in statements from the Schertz police department.

“We will seek to protect this young man from a discriminatory narrative,” said House.

The Schertz Police Department released a statement in response to the allegations, saying they are investigating the incident and cannot comment on the investigation.

Here’s the statement in its entirety.

“The Schertz Police Department is committed to serving our community with understanding and the highest integrity, while upholding our guiding principles. In doing so, our officers are expected to maintain the highest ethical and moral standards in every interaction with those we serve. As a police department, we welcome concerns or feedback on ways that we, as a department, can improve, especially when those concerns involve our officers and their interactions with the community,” said the press release.

“At this time, we are actively investigating the incident involving Zekee Rayford and cannot comment further on the investigation. At the conclusion of the investigation, if any policy infractions are discovered, staff will be held accountable and appropriate actions will be taken,” the statement read.
“The Schertz Police Department is and will remain committed to serving our community and providing a safe place for all.”
KSAT TV reports Rayford was charged with felony evading in a motor vehicle, resisting arrest and possession of marijuana.  KSAT also reports Rayford  has previous arrests, including evading arrest, engaging in organized criminal activity, and delivery of a controlled substance.