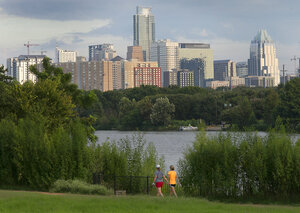 FILE - Women walk through the Lakeshore area of Austin, Texas, with the skyline in the background on Aug. 31, 2016. The Texas capital became the largest U.S. city to challenge its 2020 census figures by filing an appeal with the Census Bureau in May 2022, saying that it has more than the 961,855 residents counted during the nation's once-a-decade head count. (Ralph Barrera/Austin American-Statesman via AP, File)

One of the most booming cities in the U.S. over the past decade thinks that it grew even bigger than the U.S. Census Bureau says it did.

Austin, Texas, became the largest U.S. city to challenge its 2020 census figures when it filed an appeal with the Census Bureau last week, saying it has more than the 961,855 residents tallied during the nation’s once-a-decade head count.

“We are one of the fastest-growing regions in the country,” Valencia said. “Any region growing as fast as Austin is going to be hard to count.”

The city of Austin is at the center of one of the most booming metro areas in the U.S., one that was attracting about 150 new residents a day in the middle of the past decade. Figures released last week show that two Austin suburbs, Georgetown and Leander, were the two fastest-growing cities in the U.S. last year, expanding by more than 10% each.

Over the past several years, metro Austin has been a jobs magnet. It’s home to Tesla’s corporate headquarters as well as a high tech hub for entrepreneurs attracted to its highly educated work force and the University of Texas’ flagship school.

The census figures were used to divvy up congressional seats among the states and redraw political districts. Nothing can be done to change numbers for those purposes, but the outcome of any challenges can determine whether the cities and counties get their fair share when it comes to the distribution of $1.5 trillion in annual federal funding.

Valencia said an inaccurate count would cause Austin to miss an unknown amount of funding for affordable housing, parks and low-income students. It’s unknown how many people live in the 7,000 housing units. However, an average of almost 2.4 people live in each household in Austin, which translates into 16,800 people.

“This affects the quality of life of residents, so it’s worth it to make sure we get every single dollar that we deserve,” Valencia said.

The 2020 census undercounted the overall U.S. population by only 0.24%. The count was challenged by the coronavirus pandemic, natural disasters and political interference from the Trump administration. But some minority groups were undercounted at greater rates than the previous decade. Historically, racial and ethnic minorities, renters and young children are the people who have been undercounted.

A report released several weeks ago by the Census Bureau showed that Texas was undercounted by 1.9%, which translates to about 560,000 residents. Texas was among several states with undercounts that did not direct as many resources as other states did to encourage residents to fill out census forms.

Until Austin filed a appeal, Detroit had been the largest U.S. city to challenge its 2020 census numbers. The Census Bureau told Detroit officials that they needed to provide more information before the city’s appeal could move forward, a city spokesman said in an email Wednesday.

States and municipalities have until the middle of next year to appeal their census figures. Challenges are rarely successful, but so far almost 30 have been launched. They have been filed primarily by small towns and counties, about half of which are in the South.

Residents of prisons, nursing homes and college dorms — places that are known as group quarters — were among the most difficult people to count during the 2020 census since students on campus were sent home when the pandemic began in the U.S. in March 2020, and prisons and nursing homes went into lockdowns against the spread of the coronavirus.

Because of the difficulties in counting these residents, the Census Bureau created a separate program for challenges of group quarter counts. The bureau will start accepting those appeals next week.