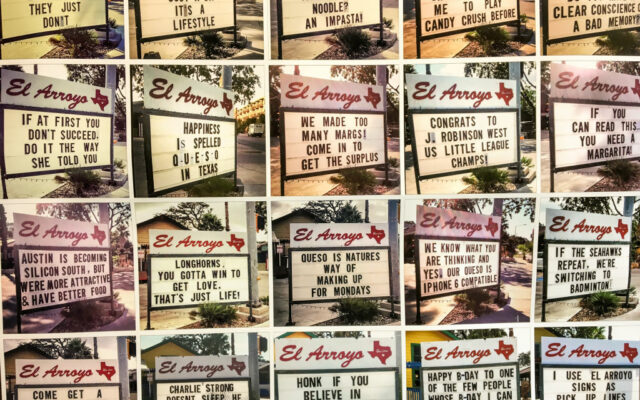 AUSTIN, TX - APRIL 14: A collage of humorous El Arroyo restaurant signs is displayed at an advertisng agency on April 14, 2017, in Austin, Texas. Austin, the State Capital of Texas, the state's second largest city, and home to South By Southwest, has been experiencing a bustling building boom based on government, tourism, and high tech business. (Photo by George Rose/Getty Images)

The Houston Chronicle reported the owners of Tex-Mex restaurant El Arroyo plans to expand across the state — with the first expansion being New Braunfels by the end of 2023.

The Winstanleys, who own the Austin restaurant, bought Rockin’ R River Rides last year and a working to turn the existing structure under the Gruene water tower into a two-story El Arroyo.

They say there could possibly be six new locations across the state in the coming years.

It’s not clear, however, if the iconic sign will also appear at these new locations.