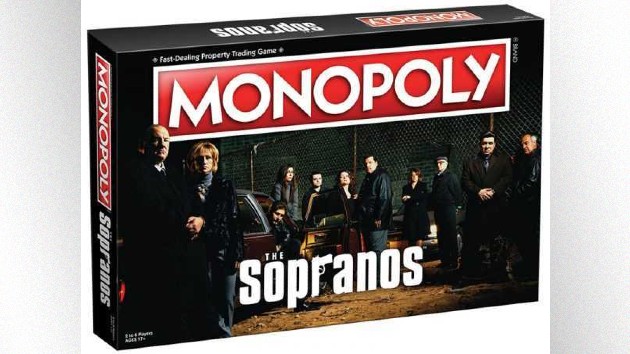 If you’re a fan of the Emmy-winning Mafia epic The Sopranos and are jonesing until this fall’s release of the prequel The Many Saints of Newark, fuhgeddaboudit: Monopoly: The Sopranos Edition is here.

The licensed twist on the classic game whacks the usual Park Place and Baltic Avenues for in-universe locations like Satriale’s Pork and the strip club Bada Bing!

The OP Games also has replaced the usual Community Chest and Chance cards with the Sopranos-esque “Ayy!” and “Ohh!” cards.

The game pieces have gone from the usual iron and puppy dog, et al, to Dr. Melfi’s chair, Tony Soprano’s boat The Stugots, a Satriale pig, a baby duck — referencing the family of birds that lived in Tony’s pool — Bobby Bacala’s toy train engine, and a Barone Sanitation truck. The game’s traditional “houses” and “hotels” have been renamed “stashes” and “contraband,” respectively. The game also comes with specially-themed money.

Monopoly: The Sopranos Edition retails for $39.99. The Many Saints of Newark is due out Oct. 1 in theaters and on HBO Max.