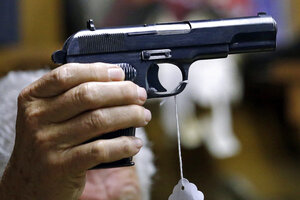 FILE - A sales clerk holds a pistol during an auction in Rochester, Wash., on Oct. 20, 2017. A study published in Annals of Internal Medicine on Monday, April 4, 2022, suggests people who live with handgun owners are murdered at more than twice the rate of people who live in homes without such firearms. (AP Photo/Elaine Thompson, File)
The credit card industry has blocked a novel effort to track suspect firearm and ammunition purchases, depriving law enforcement of a potential tool to identify and stop gun crime.

Documents obtained by CBS News show employees from domestic and international credit card companies, including Visa, Mastercard and American Express, pushed back on an application to create a merchant category code for firearm and ammunition sellers.

The application was first submitted in July 2021 by the New York-based Amalgamated Bank, and was twice denied by the International Standards Organization (ISO), which sets standards across the financial services industry. The documents show that the credit card industry employees were part of an internal committee within ISO that recommended the application’s rejection. The ISO told CBS News the credit card companies only advised the committee and did so in a “personal capacity.”

“So much illegal gun activity depends on your ability to use the financial system to buy the guns,” Priscilla Sims Brown, the CEO of Amalgamated Bank told CBS News chief investigative correspondent Jim Axelrod in an exclusive interview.

Amalgamated was founded by union workers nearly 100 years ago and bills itself as the nation’s oldest socially responsible bank.

“We believe you can do well and do good,” Sims Brown said.

The bank began considering applying for a unique firearms seller code after it said it noticed some of the deadliest mass shootings were being financed with credit cards.

The shooter who terrorized a Colorado movie theater in 2012 charged more than $9,000 worth of guns, ammunition and tactical gear in the two months leading up to his attack that killed 12 and injured 70.

The man who shot up the Pulse Nightclub in Orlando, killing 49 people, put more than $26,000 on credit cards.

And the shooter who killed 59 at a music festival in Las Vegas charged almost $95,000.

“We have an obligation to address crime that is being facilitated through our system,” Sims Brown said.

What merchant codes for gun sales would yield

Sims Brown said a merchant category code for firearm and ammunition sellers would yield data that could identify a transaction was made at a gun store, while not revealing which individual products were purchased. Merchant codes are used across all sorts of industries.

“So you might be — a nail salon. You might be a sporting goods store. There’s a merchant category code assigned to you, so that we can see that purchase has been made,” Sims Brown said.

And while even shoeshine parlors have their own merchant code, the nearly 9,000 standalone U.S. guns sellers do not. With a unique code for firearm and ammunition sellers, the bank said it could run software to detect purchases in the same way it detects evidence of other suspicious activity, like fraud and human trafficking.

“We could identify and detect where there may be gun sales that are intended for black markets, where we see patterns of gun purchases being made in multiple gun shops,” Sims Brown said. “We could see the patterns of behavior that would indicate to us that there is something not right here.”

The bank said it could then file what’s called a suspicious activity report with law enforcement if they suspect possible gun crimes. Banks and credit unions made more than 1.4 million of the reports in 2021, flagging transactions that might suggest anything from identity theft to terrorist financing.

“It may bring to the attention of law enforcement something that they were previously unaware of,” Yurgealitis said.

“I can confirm that the MCC code application has been received and will be brought forth for discussion when the committee meets again,” the Mastercard employee wrote in an email to Amalgamated.

In October, the bank’s application was denied. Before it applied, the bank was informed by the Visa employee in an email: “Although I can’t specify the actual voters or individual names, there is representation from all the major cards [sic] brands globally (MC, Visa, Amex, JCB, Discover, etc.).”

Amalgamated decided to appeal the decision after seeking further input from the card company employees.

“Specific MCC [codes] in narrow retails [sic] areas are challenging,” wrote an employee from American Express. “Managing long lists of narrowly defined MCCs can become burdensome if there isn’t a compelling reason for the long list.”

In February, the international organization denied Amalgated’s appeal. In an email, the bank was told a new code for gun and ammunition sellers would fail to capture “the sales at sporting goods stores” and, at the same time, would place a “burden” on small retailers.

“I mean, the shoeshine shop has a merchant code,” she said. “Why not the gun shop? It’s just so obvious. it’s hard to deny the logic.”

The International Standards Organization told CBS News the credit card companies were not responsible for the decision. Employees from those companies were serving in a personal capacity and “do not represent the views of their employer.” Those who pushed to reject Amalgamated’s application did so “based on their expertise,” the organization said.

In statements to CBS News, American Express and Mastercard both said they were working to ensure only lawful purchases were permitted on their networks, but offered no specifics. Visa declined to comment.

Neither Visa, Mastercard, nor American Express would say if their companies supported creating a merchant code for firearms sellers, when asked by CBS News. In a statement, Mastercard said “we believe that it is the responsibility of elected officials to enact meaningful policies to address the issue of gun violence, while it remains Mastercard’s role to ensure that consumers are permitted to make lawful purchases on our network.”

“It is our responsibility,” she said. “What price do you put on a life? If it stops two people from dying, isn’t that worth it?”