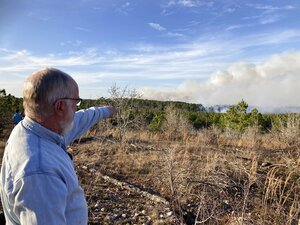 BASTROP, Texas (AP) — A wildfire in a central Texas state park is no longer growing and no injuries were reported after the blaze, suspected to have been caused by a prescribed burn, charred 1.2 square miles (3.2 square kilometers), officials said Wednesday.

Texas A&M Forest Service spokesperson Kari Hines said no homes have been reported destroyed and some families were allowed to return home after an evacuation order was partially lifted. She said warmer conditions with lower winds and higher humidity expected Wednesday will help firefighters fully extinguish the fire.

The precise cause of the fire that began Tuesday has not been determined, but a prescribed burn in Bastrop State Park is suspected.

“We absolutely believe there were embers from the prescribed fire that undoubtedly caused the fire … what we don’t know is how that happened,” said Carter Smith, director of the Texas Parks and Wildlife Department.

Smith said a full investigation will determine the cause, but added that the current focus is on making sure the fire is fully extinguished and all residents and property are protected.

According to the National Park Service, a prescribed fire is a planned fire used for resource benefits or research. The conditions taken into account include the safety of the public and fire staff, weather and the likelihood that the desired outcome will be obtained.

“Prescribed fire is a critically, critically important tool in our state. We have to manage fuel loads and fire risks with the strategic, judicious application of prescribed fire,” Smith said.

As of Tuesday morning, Smith said, Bastrop County was under weather conditions considered OK for a prescribed burn.

“I’m unequivocally convinced that our burn boss thought it was safe to carry out that fire,” Smith said.

The fire rekindled memories of a 2011 wildfire that killed two people and destroyed 1,600 homes in Bastrop, about 30 miles (48 kilometers) southeast of Austin. The blaze scorched more than 50 square miles (1,630 square kilometers), including 96% of the state park.