BCSO: Man was kidnapped and hogtied then shot and left to die 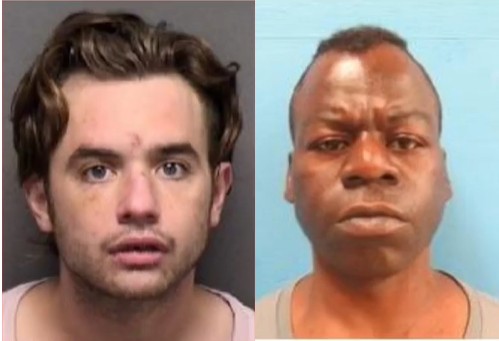 Image courtesy of the Bexar County Sheriff's Office / Uriah Huffman, left, and Darryl King, right, were arrested in connection with the assault of Justin Sandoval on April 23, 2022.

Deputies arrested two suspects in the investigation after Justin Sandoval, 24, was found on April 23 mostly naked, tied-up and suffering from several gunshot wounds. Sheriff Javier Salazar said he lost an eye, was shot several times in the head, but is alive.

Officials arrested Uriah Huffman, 24, and Darryl King, 36, are charged them both with aggravated kidnapping and aggravated assault.

Salazar said that Huffman and Sandoval had some sort of violent encounter at the night before the assault at a trailer park in Cibolo. The violent argument culminated in Sandoval reportedly hitting Huffman in the the face with a guitar.

Investigators said Huffman contacted King about the fight with the victim and the pair planned retaliation.

The two men assaulted Sandoval at the trailer park in Guadalupe County. Salazar said King pistol whipped Sandoval before he was tied up with rope and zip-ties. The men reportedly cut Sandoval’s clothing off with a knife in a manner intent to “humiliate and terrorize” the 24-year-old.

Sandoval was then loaded up and driven into Bexar County to the roadside on Lavernia Road where he was found several hours later. Salazar said the men threw Sandoval on the ground and one of the suspect’s shot the victim in the head several times.

“I can’t event imagine what this young man went through,” Salazar said. “From the best we can figure he was laying out there for five or six hours tied up, shot, bleeding profusely and basically waiting to die where they had left him.”

Officials located Huffman on Tuesday at a homeless encampment on the northeast side of town. He was arrested and is in the Bexar County Jail on a $200,000 bond.

Salazar said King was arrested on April 27 after police were able to identify him in the investigation. He was found at a home in Cibolo and was in possession of the gun used in the assault on Sandoval.

Cibolo police arrested King on charges on theft of a firearm, unlawful possession of a firearm by a felon and the aggravated kidnaping and assault charges. He is currently booked into the Guadalupte County Jail on a $175,000 bond. He is awaiting extradition to Bexar County Jail.