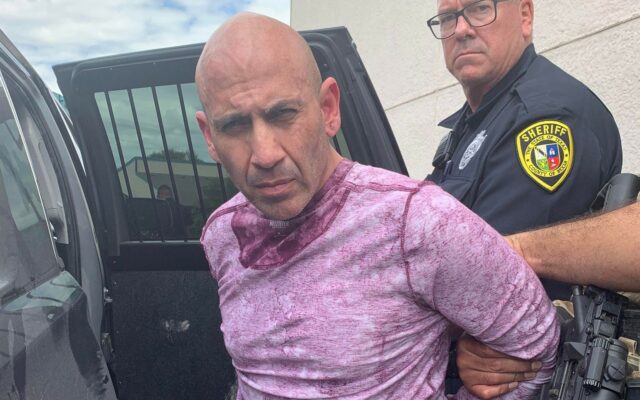 This story was updated throughout at 4:40 p.m.

SAN ANTONIO (KTSA News) — The suspect in a standoff at a Northwest Side apartment complex is in custody.

The Bexar County Sheriff’s Office was  able to arrest 48-year-old Christopher Lombrano about four and a half hours after the standoff began early Thursday morning at the Station at Elm Creek apartment complex.

Officials said deputies from the Fugitive Apprehension Unit attempted to execute warrants for Lombrano’s arrest around 10:30 a.m. for assault family violence and violating a protective order.

Sheriff Javier Salazar said Lombrano barricaded himself in the bathroom when deputies entered the unit and began making threats he would blow up the apartment. The threats prompted deputies to retreat, evacuate the surrounding apartment units and set up a perimeter while officials attempted to negotiate a peaceful surrender.

Salazar said deputies attempted negotiations for some time, including buying Lombrano a pack of cookies from a nearby convenience store at his request, but officials realized he was not negotiating in good faith.

Deputies eventually deployed tear gas into the bathroom Lombrano had barricaded himself in, after which officials were able to apprehend him. No other injuries were reported.

Salazar said he is currently in custody and being decontaminated from the teargas. He will be transported to the Bexar County Jail and face additional charges over the standoff.