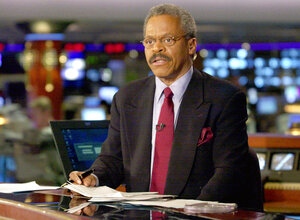 NEW YORK (AP) — Bernard Shaw, CNN’s chief anchor for two decades and a pioneering Black broadcast best remembered for calmly reporting the beginning of the Gulf War in 1991 as missiles flew around him in Baghdad, had died. He was 82.

He died of pneumonia on Wednesday at a hospital in Washington, according to Tom Johnson, CNN’s former chief executive.

Shaw was at CNN for 20 years and was known for remaining cool under pressure. That was a hallmark of his coverage Baghdad coverage when the U.S. led its invasion of Iraq in 1991 to liberate Kuwait, with CNN airing stunning footage of airstrikes and anti-aircraft fire in the capital city.