Bernie Sanders, criticizing ‘bully’ Trump, says debate was ‘not one of the great moments in American history’ 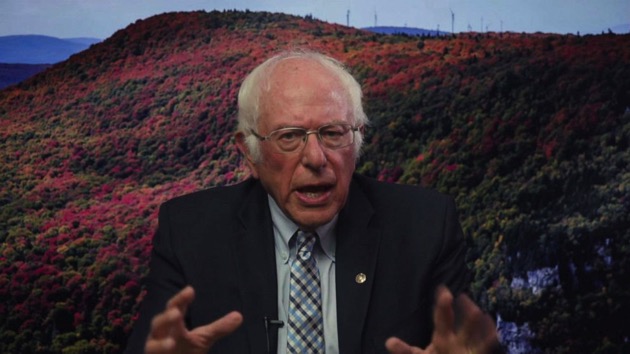 (NEW YORK) — Sen. Bernie Sanders expressed disappointment in the first presidential debate between President Donald Trump and Democratic nominee Joe Biden, describing it as “not one of the great moments in American history,” while criticizing the president for lying about his record in office, particularly on health care.

“I think what you have in President Trump is somebody who is a pathological liar, somebody who doesn’t believe that the rules apply to him, and somebody who is a bully,” Sanders, I-Vt., said on The View Wednesday morning. “And I know the moderator and certainly Joe Biden had a hard time dealing with that reality.”

The senator took particular issue with Trump’s efforts to roll back the Obama administration’s Affordable Care Act without proposing a substantive replacement, claiming the insurance of tens of millions of Americans was at stake.

“The most important point to be made is that Trump lied and lied and lied again,” Sanders continued. “When asked whether or not he had come forward with a health care plan — we’ve got 90 million Americans today who have no health insurance or are underinsured, and the cost of health care is soaring — and Trump has not done anything, zero, except to make a bad situation worse by going to the Supreme Court … and trying to rule the Affordable Care Act unconstitutional.”

After suspending his own presidential campaign in April, Sanders teamed up with Biden to form a group of policy task forces on issues like health care, the economy and climate change. Trump seized on the partnership during the debate Tuesday to label the task forces’ recommendations a “manifesto” and accuse Biden’s platform of shifting to the left, despite the former vice president refusing to endorse Sanders’ “Medicare for All” single-payer plan and the Green New Deal.

On The View, the senator was asked about his continued policy differences with Biden, despite Trump’s attempt to conflate their positions, plus the former vice president’s claim on Tuesday that his stances now constitute those of the Democratic Party.

“What that exchange was about was an interesting exchange, OK? Trump lied in saying that Biden supports my view,” Sanders said. “I happen to believe that I am right. I happen to believe that the United States should join every other major country on Earth and guarantee health care to all people as a human right through a Medicare for All single-payer program.”

“You know what? What Joe Biden said was right. He does not agree with me, though I wish he did, but he does not,” he continued, while highlighting he approves of Biden’s effort to lower the Medicare eligibility age and the cost of prescription drugs.

After the debate, Sanders appeared on “Jimmy Kimmel Live” and acknowledged his differences of opinion with Biden, but argued that any of his supporters considering not voting for the former vice president would be making “a serious mistake” — a sentiment he repeated Wednesday. The senator also teased that he’d be returning to the campaign trail on Biden’s behalf “fairly soon.”

In recent weeks, Sanders has been sounding the alarm about Trump’s potential to claim victory in the election before a complete count of the vote is taken. Last week he held his first in-person event since existing the campaign to deliver a speech warning of that possibility and offering recommendations to ensure Americans are aware of potential delays and of the safety of mail-in ballots.

“You’ve got a president right now who literally does not believe in the rule of law and does not believe in American democracy,” Sanders said on The View. “What you heard him say last night, in so many words, is, ‘The system is rigged, and if by some chance I were to lose this election, it’s not because the people want to throw me out. It’s because it was a rigged system, and I may not step down.’”

The senator also commented on Amy Coney Barrett’s Supreme Court nomination and stories by The New York Times that show Trump frequently paid little or no federal income taxes, including the first year of his presidency.

He said he “strongly disagree[s]” with the judge’s views and expressed concern about how she may rule in a forthcoming case addressing the Affordable Care Act, while joining the Democrats with whom he caucuses in criticizing Republicans for the timing of her possible confirmation.

“I say to Trump right now today: If you had paid millions and millions of dollars, if you think The New York Times is ‘fake news’ and is lying, then you can solve that problem,” Sanders continued, referencing Trump’s initial response to the story. “Show us your tax returns like every other presidential candidate has done, expose The New York Times and show the American people that you really have paid your taxes.”

“But the truth is, Trump won’t do that because he is blatantly lying,” Sanders continued, adding that it is a “national security issue” if the president is hundreds of millions of dollars in debt, which the Times reported.