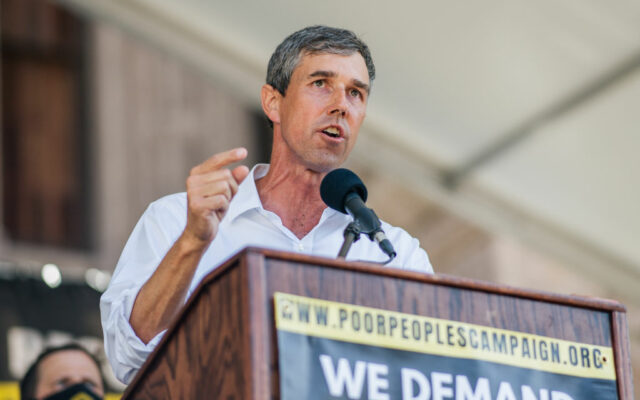 “Beto O’Rourke says he’s running for Texas governor” was first published by The Texas Tribune, a nonprofit, nonpartisan media organization that informs Texans — and engages with them — about public policy, politics, government and statewide issues.

Beto O’Rourke is running for governor, challenging Republican Greg Abbott in a clash of two of Texas’ biggest politicians.

“I’m running to serve the people of Texas, and I want to make sure that we have a governor that serves everyone, helps to bring this state together to do the really big things before us and get past the small, divisive politics and policies of Greg Abbott,” O’Rourke said in an interview with The Texas Tribune. “It is time for change.”

The former El Paso congressman, 2018 U.S. Senate nominee and 2020 presidential contender said he was running for governor to improve public schools, health care and jobs in Texas. But O’Rourke also took sharp aim at Abbott’s record, citing new laws he backed this year that ban most abortions in Texas, tighten voting rules and allow permitless carry of handguns. He also criticized Abbott over the February power grid failure that left most of the state without electricity in subfreezing temperatures and his response to the coronavirus pandemic that has recently been focused on fighting vaccine and mask mandates.

In a video announcing his campaign Monday morning, O’Rourke focuses heavily on the grid failure, saying Texans were “abandoned by those who were elected to serve and look out for them.” O’Rourke said in the interview that Abbott “has stopped listening to and trusting the people of Texas.”

“He doesn’t trust women to make their health care decisions, doesn’t trust police chiefs when they tell him not to sign the permitless carry bill into law, he doesn’t trust voters so he changes the rules of our elections, and he doesn’t trust local communities,” O’Rourke said, referring to Abbott’s policies preventing local officials from making their own pandemic rules.

O’Rourke’s decision to enter the race ends months of speculation and gives Democrats a formidable campaigner at the top of the ticket — someone who transformed Texas politics with his blockbuster campaign against U.S. Sen. Ted Cruz in 2018. The clock has been ticking, with the candidate filing deadline for the March 2022 primary less than a month away.

Abbott has already been campaigning against O’Rourke as too liberal for Texas, branding him “Wrong Way O’Rourke” and seizing on multiple positions he has taken since last running statewide. At the top of the list is O’Rourke’s proposal to require buybacks of assault weapons during his presidential campaign. That led to a memorable moment on the debate stage in which O’Rourke proclaimed that, “Hell yes, we’re going to take your AR-15, your AK-47.”

O’Rourke said he was not backing away from that proposal in his latest campaign.

“I think most Texans can agree — maybe all Texans can agree — that we should not see our friends, our family members, our neighbors, shot up with weapons that were originally designed for use on a battlefield,” said O’Rourke, whose hometown of El Paso was the site of an anti-Latino mass shooting in 2019 by a gunman who killed 23 people.

The gubernatorial race marks O’Rourke’s third campaign in as many election cycles — and it is unfolding in a much different context than his first statewide run three years ago. He is now well-known to Texas voters, and polls show more voters have a negative opinion of him than a positive one. The national environment is also working against him this time, with President Joe Biden, a fellow Democrat, deeply unpopular in Texas.

While Abbott’s approval rating has sunk to its lowest levels since he first became governor in 2014, O’Rourke starts as an underdog. The latest University of Texas/Texas Tribune poll found O’Rourke trailing Abbott by 9 percentage points.

Asked how he was approaching this campaign compared to the 2018 one, O’Rourke said he would be taking his cues from Texans.

“A big lesson that I take from anything I’ve been a part of that’s been successful is you gotta keep the focus on people,” O’Rourke said. “And if this becomes about a single candidate or political party instead of the people of Texas, it’s just not gonna work.”

But O’Rourke is changing up at least a couple of tactics for the race.

This time he said he plans to run ads that draw a contrast with Abbott, something he did not do against Cruz until the final weeks of the race. O’Rourke also suggested he is open to using polling — which he eschewed in 2018 — to “make informed decisions about where we deploy resources,” while insisting he would never use polling to tailor his message.

Unlike when O’Rourke ran for U.S. Senate and was subject to federal campaign finance laws, O’Rourke faces no contribution limits at the state level. He has long crusaded against the big money in politics, making his refusal to accept political action committee money a cornerstone of his campaigns. But he confirmed he would accept unlimited donations as allowed under state law, saying he did not want to “run this campaign with a hand tied behind our backs.”

“Having said that, you will not see anything like what Greg Abbott has done in terms of coming very close to the line of open corruption,” O’Rourke said, pointing to the $1 million donation that Abbott got from Dallas pipeline mogul Kelcy Warren in the months following the grid failure that his company profited from.

As for Biden, O’Rourke did not express any concerns when asked about the impact of the president’s unpopularity on the gubernatorial contest. O’Rourke said he was grateful for things the president has gotten done that benefit Texas, like the latest portion of federal COVID-19 recovery funds and the $1 trillion infrastructure bill that Biden is set to sign into law Monday.

“I will partner with anyone, anywhere, anytime — regardless of political party or position of power they may hold — to make sure that we make progress here in Texas,” O’Rourke said.

At least two other Democrats are running for governor. They include Michael Cooper, the president of the Beaumont NAACP who ran for lieutenant governor in 2018, and Deirdre Gilbert, an educator from the Houston area.

Abbott is navigating his own spirited primary as he pursues a third term, facing at least three challengers from his right. They are former Dallas state Sen. Don Huffines, conservative commentator Chad Prather and former Texas GOP Chairman Allen West.

O’Rourke burst on to the statewide political scene in 2018 with his star-making challenge to Cruz. He toured all of Texas’ 254 counties and smashed fundraising records, gained national attention and ultimately finished 3 percentage points behind Cruz.

Months later, O’Rourke jumped into the presidential contest, joining a crowded primary for the chance to take on then-President Donald Trump. His campaign struggled to break out of the back of the pack for most of his time running.

The El Paso shooting reinvigorated O’Rourke and brought a new urgency to his campaign, but it was not enough. He dropped out of the race weeks later as he was running low on money and grappling with potentially missing the cut for an upcoming debate.

O’Rourke wasted little time reengaging in state politics. He resisted encouragement to pivot to challenging U.S. Sen. John Cornyn and instead formed a political action committee, Powered by People, to help Texas Democrats in the 2020 election.

O’Rourke popped up in the presidential primary again that March, endorsing Biden at a Dallas rally on the eve of the state’s nominating contest. Biden ended up winning the Texas primary as part of a sweep of the Super Tuesday states that propelled him on a path to the nomination.

For the rest of the 2020 election cycle, O’Rourke and his group focused mainly on Democrats’ fight to capture the state House majority. They came up woefully short, failing to net a single seat.

O’Rourke was back in the public spotlight in February, amid the winter weather crisis that left millions of Texans without power and hundreds dead. He used his platform to fundraise for relief efforts and traveled the state volunteering for the recovery.

Over the summer, O’Rourke became a leading figure in Texas Democrats’ push for federal voting rights legislation. While Democrats in the Texas House broke quorum over Abbott’s priority elections bill and went to Washington, D.C., to lobby Congress for help, O’Rourke crisscrossed Texas to build public pressure for federal legislation.

However, Democrats were not successful on either the state or federal levels. The state House Democrats eventually returned to Austin to allow Republicans to pass their restrictive elections legislation, while Congress still has not sent a voting rights bill to Biden’s desk.

This article originally appeared in The Texas Tribune at https://www.texastribune.org/2021/11/15/beto-orourke-texas-governor-2022/.