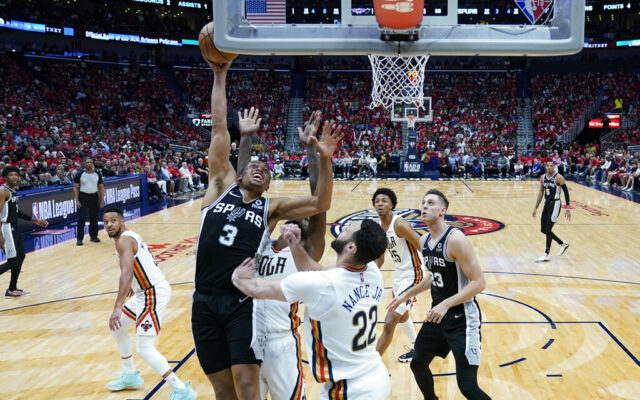 Spurs Sports & Entertainment General Legal Counsel Bobby Perez spoke to the Commissioners on Tuesday, asking for permission to play four home games away from the team’s home court in the next two seasons in a bid to expand the brand.

The Commissioners each expressed reservations about the move.

“I think you’ve already picked up on that a lot of the angst is always about, you know, are the Spurs committed to staying in San Antonio? That angst in amplified  when you start talking about our friends up 35 in Austin,” Precinct 2 Commissioner Justin Rodriguez said, noting the amount of corporate resources available to the Spurs in Austin. “I would imagine you already have a certain number of folks who are season ticket holders who come from Austin for a lot of the home games. And from Mexico.”

Perez reaffirmed the Spurs’ commitment to staying in the Alamo City.

“I’ll adopt RC Buford’s statement that he shared with you yesterday publicly, that this sets the groundwork for what the next five decades looks like, not only for our club, but for our community,” Perez said. “And I think under RC’s and Peter J. Holt’s leadership that we’ve been trying to figure out how are we using our brand to amplify every that’s going on in our community, up and down the corridor and across the world, quite frankly.”

Rodriguez offered a negotiation “as an act of goodwill and as a good partner in wanting to support our team,” to allow the Spurs to conduct a pilot program of four games away from AT&T Center: One in the Alamodome, one in Mexico and two in Austin.

Perez said that some proposed sites like the Alamodome and Moody Center in Austin are not NBA approved. Those sites would require the league to conduct compliance inspections. He noted the venue in Mexico City is compliant and the league has a target date in December for the international match, but is waiting for permission from the county.

The current contract between Bexar County and the Spurs has a clause that allows for two home games to be played away from AT&T Center, but Perez said Tuesday the team has not utilized the opportunity because of some confusion about the way the clause is written.

Rodriguez made the motion to have staff and legal counsel negotiate the terms of the four game pilot program and to clarify the language in the existing contract. The motion passed 3 to 2.

“That’s not a good sign, alright?” Judge Nelson Wolff said. “It’s shows you there’s a divided opinion in this community as to the intention of the Spurs.”

Wolff admonished the fact that Buford did not appear in front of the Commissioners himself to make the request and implored Spurs ownership to be present at the next vote in two weeks.

“It’s our agreements with them, not with [legal counsel], but with the owners of this thing,” Wolff said. “They ought to be here.”