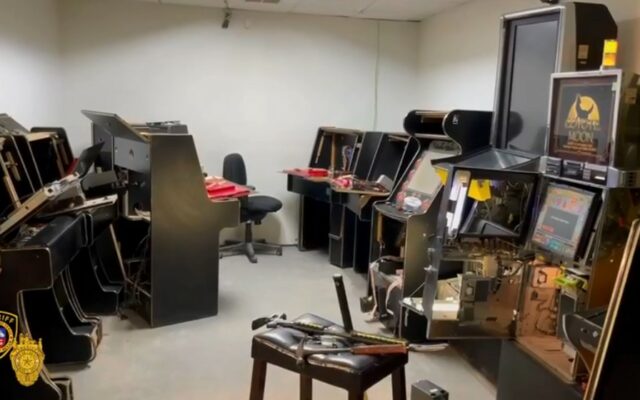 SAN ANTONIO (KTSA News) — Guns, drugs and gambling machines were seized in a coordinated bust on the far West side of San Antonio.

Sheriff Javier Salazar said the department discovered the machines along with a dozen guns, felony amounts of meth, several stolen vehicles and multiple individuals with active arrest warrants on Wednesday morning in an organized operation that spanned several buildings.

The department had to use an armored vehicle to enter the property because the front gate was blocked by a vehicle, the sheriff said. He said they were also told there would be an armored guard with an assault rifle at the gate, but the man did not have a gun when SWAT arrived.

“He didn’t have any weapons, he didn’t want to play at that point,” Salazar said.

Salazar said most of the weapons found were some handguns and “Saturday Night Special” weapons, but he noted there was one surprise find.

“I did see at least one Tommy gun that I haven’t seen in quite some time,” the sheriff said. “At this point, I don’t know if that Tommy gun was fully automatic or semi-automatic, but it’s still a large caliber rifle.

Five people were reportedly detained, one of which had a felony warrant for aggravated assault with a deadly weapon and one of the individuals reportedly has warrants for running a gambling operation within the city.

Salazar said deputies and the SWAT team would be continuing their search of the property into the afternoon.

The property reportedly previously housed an auto service shop and one of the people arrested had warrants related to the now-closed business.

“I don’t know if it was ever actually an auto repair business or if that was sham,” Salazar said. “Kind of a front business … [it] is pretty commonplace with operations like this.”

No charges from the bust have been confirmed, but Salazar said the group may face organized crime charges on account of the drugs and weapons discovered in addition to the machines.