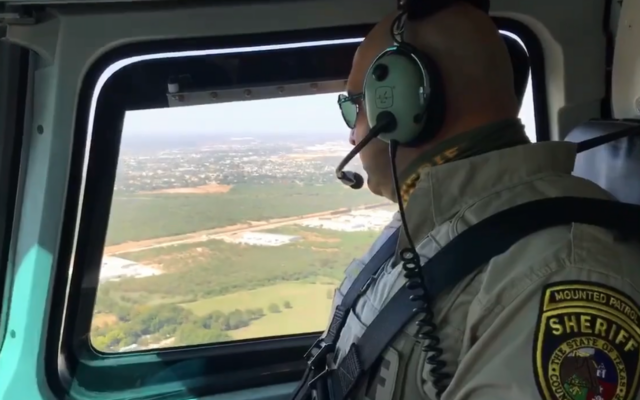 SAN ANTONIO (KTSA News) — Bexar County Sheriff Javier Salazar flew to Del Rio yesterday to get a first-hand look at the situation unfolding on the border that has captured national attention.

Salazar said the news that border patrol checkpoints were unmanned prompted the trip over concerns that drug smugglers could enter the country unabated.

“I feel strongly that border issues are Bexar County issues,” Salazar said. “Geographically, [San Antonio] is the first major city that is hit from somebody coming through the Southern border. We’re a hub city.”

Salazar said, as a result, county deputies were out on highways in higher numbers than normal over the weekend in an effort to assist with highway enforcement normally reserved for State Troopers out of the Texas Department of Public Safety.

“San Antonio is a big staging point where [traffickers] can hit smaller distribution routes from [the border],” Salazar said. “The fact is that a lot of what’s going on at the border comes right through our county limits here.”

Salazar said he flew into Del Rio and hitched a helicopter ride with DPS to get a top-down view of the situation. He described the scene as “eye-opening.”

“They took us for a recon mission over the bridge area and … we were pretty awestruck by the sheer numbers of federal agents from Border Patrol,” Salazar said. “And, of course, State Troopers from DPS that were there, they’re doing a great job of handling the sheer mass… the sea of humanity that’s coming across the border.”

Salazar continued, saying he could see people crossing the river.

“We could see down below that there is a rope that somebody fashioned from one bank of the river to the other, and foot traffic is going back and forth,” he said. “What they’re doing is wading through the river, but using the rope as a guide to walk themselves through to keep their balance… They’re grabbing food from the Mexican side and then coming back to the American side. It’s pretty much a free flow. There’s really nobody impeding their movement one way or the other that we could see.”

Salazar said the area under the bridge can be described as a “shanty town” made up of tents and shacks. He said he did not see any active law enforcement taking place under the bridge. Troopers and Border Patrol Agents, instead, were close by monitoring and watching the movements, “but really making no move to interfere [or] stop them in any way.”

There were also people enjoying the river recreationally, Salazar said, “hanging out, fishing, doing whatever.”

The most disconcerting takeaway, the Sheriff said, was that other officials told Salazar that efforts were solely concentrated near the bridge under national scrutiny.

“[They said that] we really don’t know with any degree of certainty what’s going on a mile that way … or 10 miles that way … So much effort has gone to be concentrated on this area here,” Salazar said. “We’re taking our eyes off other parts of the river [and] other parts of the border to make sure that … this big mass of humanity is safe and sound.”