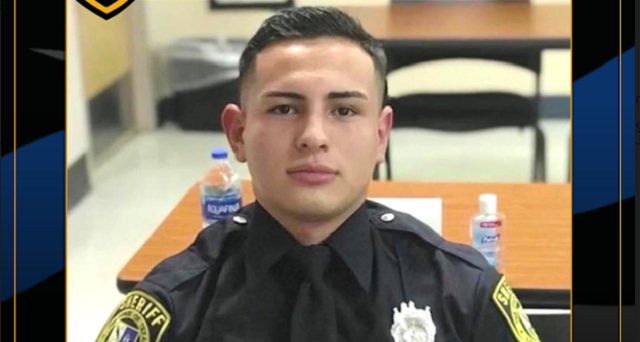 SAN ANTONIO (KTSA News) – A twenty-year-old Bexar County Sheriff’s Deputy and his fiancée have been killed in a crash with an 18-wheeler in San Patricio County.

Noah Calderon, his fiancée, and his 13-year-old brother were on the way to Corpus Christi Wednesday night when the pickup they were in was hit by the tanker truck near Texas 188 and FM 796 between Sinton and Mathis.  The San Patricio County Sheriff says the driver of the 18-wheeler may have failed to yield and collided with the victims.

Calderon was the youngest deputy to be hired by the Bexar County Sheriff’s Office at the age of 18.   His father, Edward Calderon, is a patrol sergeant with BCSO.

Calderon and his fiancée were pronounced dead on the scene.  Luke Calderon was airlifted to University Hospital with critical injuries.

“As an agency, we mourn the loss of a great man and our brother in blue.  I ask that you keep Noah’s family, friends and everyone affected in your prayers,” said Sheriff Javier Salazar.

He says Calderon worked “soft security” at the entrance to the Bexar County Detention Center and was the “face” and the “future” of the agency.

“He was absolutely going to run this agency one of these days.  He was a leader, ” said Salazar.

Calderon was looking forward to obtaining a Peace Officer License.