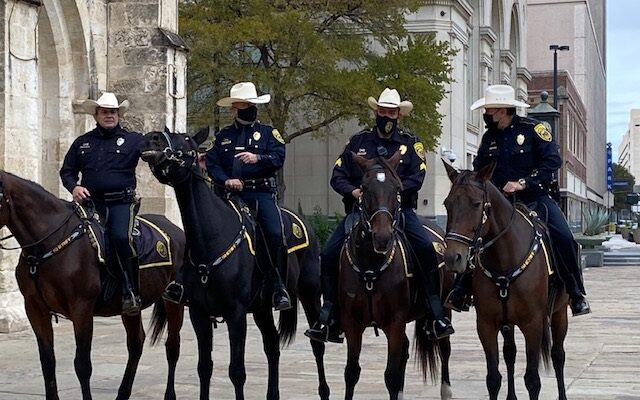 SAN ANTONIO (KTSA News) – The Bexar County Sheriff’s mounted patrol and K-9 units got a special blessing Friday morning outside San Fernando Cathedral.  Father Victor Valdez sprinkled holy water on the working horses and dogs and prayed for them during the BCSO Blessing of the Animals.

“These horses and dogs stand with us shoulder to shoulder as we protect our community and today we wanted to lift them up in prayer  and just ask the Lord to send a special blessing our way,” said Sheriff Javier Salazar.

He noted that like their human partners, the animals’ lives are on the line every day.  Last year, K-9 officer Chucky was shot and killed by a suspect.

“In some of the unrest in Dallas, one of the police horses was actually injured pretty severely when he was struck in the face by a brick,” said Salazar.

Deputy Ray Ruiz and his K-9 partner, Bexar, sniff out drug suspects.  The Giant Schnauzer’s sensitive nose can detect methamphetamine, heroin, cocaine and marijuana.   Bexar lives with Ruiz and his family, and when the K-9 deputy is off duty, he loves to play.

“This guy loves to play with the kids and jump on the trampoline.  He can actually hold a basketball in his mouth,” said Ruiz.

There is one problem.