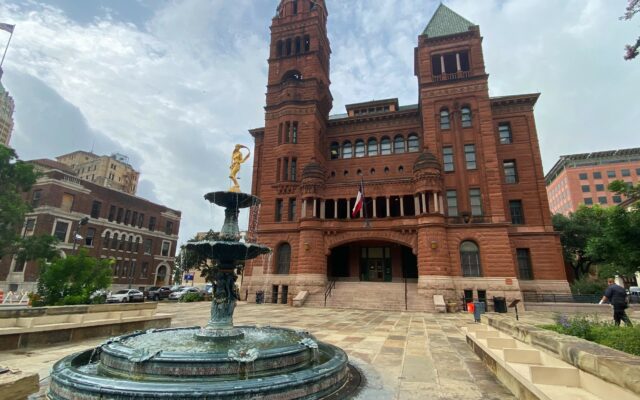 KTSA NEWS/KATY BARBER - The Bexar County Courthouse is the largest and oldest operating courthouse in the state.

Ron Rangel, local administrative judge for Bexar County courts and judge of the 379th District Court, signed the official order Wednesday citing the surge in positive tests and hospitalizations related to the delta variant of COVID-19 as the reason for the suspension. Jury trials already underway will continue until a verdict is reached.

Rangel wrote the upward trend of COVID-19 cases is expected to peak in late August.

“After careful deliberation and consultation with the local health authority, and in an abundance of caution, the Court has determined the best course of action is to suspend jury service. Jury trials that have already begun may continue through verdict,” Rangel said.

Rangel said the mask mandate that includes the Bexar County Courthouse, the Cadena Reeves Justice Center, the Paul Elizondo Tower, the Tejeda Juvenile Justice Center, the 386th District Court, all Justice of the Peace buildings, and any building housing any specialty courts remains in effect. This mask requirement is not in violation of Texas Governor Greg Abbott’s executive order prohibiting mask mandates due to a ruling by the Texas Supreme Court in March.

“While we had hoped the return of jurors on June 1, 2021, would be a beginning of more normal court operations, we understand Judge Ron Rangel’s order to suspend jury service. We do not want a simple act of public service to put anyone’s health in jeopardy,” Bexar County District Attorney Joe Gonzales said. “Now is the time for all of us to do our part to prevent the spread of COVID-19. Until this potentially deadly virus is behind us, restrictions like this will lead to a further delay of justice for both victims and those accused of crimes. The backlog of pending cases will grow, but as we did beginning in March 2020, our staff will continue to review and work on cases as best we can either in-person or through virtual hearings. As I’ve said before, while most of our cases are resolved by plea agreement, a jury panel waiting outside the court is sometimes what it takes to make that happen. We will do all within our power to continue to bring justice to victims of crime as quickly as circumstances allow.”