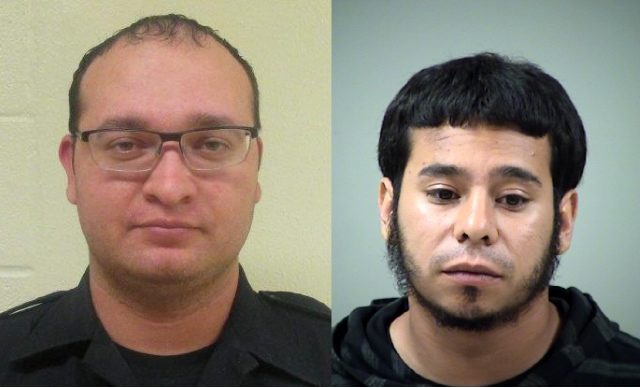 Bexar County sheriff Javier Salazar said his office, along with San Antonio police and the FBI, learned 30-year-old Cpl. Armando Trevino’s plans Saturday morning to meet with someone to get narcotics that he would then smuggle into the Bexar County jail.

Deputies, along with their partners, set up surveillance at a gas station near Broadway and Interstate 410 where they watched Trevino — who worked in the detention unit — get the drugs from 33-year-old Rudy de la Cruz.

Both were swiftly arrested.

Salazar said Trevino was wearing his sheriff’s office uniform at the time of the exchange since he was on his way in to his shift that day.  He was also carrying a gun on him, though he is not a sworn peace officer.  Salazar said the deputy has a concealed carry license.

The sheriff said they were looking to smuggle heroin and Suboxone.

“[Suboxone] is an opiate,” Salazar explained  “The way it’s administered is… below the tongue.  It is a drug that in appearance, it appears a lot like those breath strips that you put under your tongue.  I would certainly ask anybody that happens to have teenagers, young folks in their home and you happen to find something like that — that could be possibly what it is.  It is a drug that is on the rise as far as being trafficked.  But in instance, it was going to be brought in to the Bexar County Jail.”

Both men have been charged with bribery and drug related charges.  Salazar also stated he is already seeking to terminate Trevino’s employment.  The sheriff said Trevino is being held in another county to avoid conflict of interest concerns.  The deputy had been with the sheriff’s office for five years.

Salazar stated it is believed Trevino has succeeded in the past in smuggling drugs into the jail and has been resourceful in trying to prevent anyone from finding out his ways.  The sheriff would not go into detail what those methods were.

“I want to commend the sheriff for taking public corruption so seriously. We will continue to root out corruption anywhere that we find it,” Christopher Combs, FBI Special Agent in Charge of San Antonio Division, stated at a news conference. “If you are involved in corruption, I would recommend very strongly that you call us and tell us what is going on.  It is much better if you call us than we come and find you and that’s what happened today.”