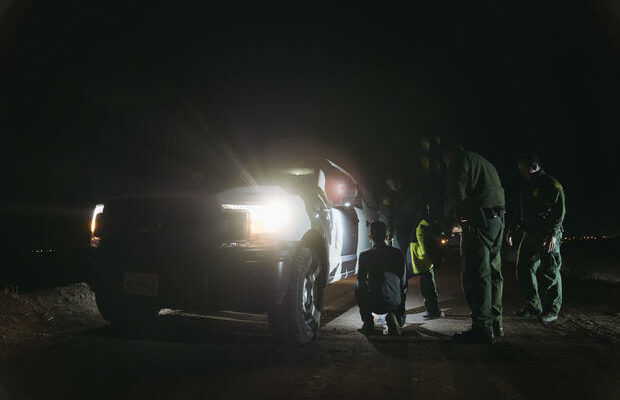 U.S. Border Patrol agents apprehend a migrant illegally crossing over the Mexico and U.S. border in Calexico, California, on Tuesday, January 4, 2022. Bloomberg
The Biden administration on Wednesday vigorously defended a Trump-era emergency order that U.S. border authorities have used to expel hundreds of thousands of migrants without screening them for asylum, arguing the unprecedented policy is still needed to control the spread of the coronavirus.

Sharon Swingle, a Justice Department lawyer representing the administration during a nearly two-hour hearing before the D.C. Circuit Court of Appeals, said the migrant expulsion policy, known as Title 42, is rooted in “scientific expertise.” She warned that its sudden termination could increase coronavirus transmission inside Border Patrol facilities and pose a “serious danger” to public health.

Swingle called the possibility of the court requiring the government to process all migrants, particularly single adults, under regular immigration procedures an “alarming specter.”

“The government’s goal is to get back to a state of orderly immigration processing for everyone, but currently, in CDC’s view, the public health realities don’t permit that,” said Swingle, who also cited the recent rapid spread of the Omicron variant.

First enacted in March 2020, the Biden administration extended Title 42 indefinitely last summer. Under President Biden, the government has carried out over 1 million expulsions citing the authority, which had previously only been invoked in a limited fashion in 1929. The Trump administration carried out 400,000 expulsions.

The oral arguments held on Wednesday offered a rare public view into the intensifying legal and political fight over the Title 42 expulsions, which have divided Mr. Biden’s appointees and angered progressive advocates, human rights groups and public health experts.

The case stems from an American Civil Liberties Union lawsuit arguing Title 42 violates several laws, including those that allow migrants to seek U.S. refuge. U.S. Circuit Judges Sri Srinivasan, Robert Wilkins and Justin Walker have to determine whether to uphold a lower court order that concluded Title 42 is likely illegal.

At Wednesday’s hearing, the panel of judges raised several questions about the stated public health rationale of the expulsions, including whether migrants are more likely to spread the coronavirus than individuals who legally cross U.S. borders.

“The statute refers to introducing a disease but COVID is unfortunately quite introduced into the United States by this point in time,” noted Wilkins, an appointee of former President Donald Trump, highlighting reports that Title 42 was invoked over the objections of some Centers for Disease Control and Prevention (CDC) public health experts.

U.S. officials relied on Trump-era CDC orders to enforce Title 42 until August 2021, when the Biden administration issued its own directive, which called for internal reviews every 60 days.

After two reviews last fall, the CDC decided to maintain the policy. The next assessment is due at the end of this month, a CDC spokesperson told CBS News on Wednesday. Despite multiple requests, the CDC has not shared written assessments for the decisions, nor underlying public health data, evidence or analysis.

Both the Trump and Biden administrations have argued that Title 42 supersedes immigration laws and allows the government to suspend asylum processing during a public health emergency.

But Srinivasan, who was appointed to the federal bench by former President Barack Obama, noted Wednesday that Congress created immigrations laws governing the processing of immigrants who could carry a communicable disease. And those laws, Srinivasan said, still allow migrants to request asylum.

Swingle, the government attorney, called Title 42 a “quite extraordinary power.”

The panel of judges also highlighted court declarations describing some of the dangers that migrants and asylum-seekers could face after being expelled from the U.S. Srinivasan asked the Biden administration lawyer to acknowledge that Title 42 allows the U.S. to expel migrants who could be harmed after being deported.

“Certainly, your honor, we are aware of and deplore the horrific circumstances that noncitizens are in in some of the countries that are at issue here,” Swingle said.

Swingle said the government does not deny that migrants “have been subject to extremely harrowing conditions in Mexico or elsewhere,” but highlighted that some vulnerable migrants are exempted from Title 42. She also noted that a limited number of migrants who express fear of being tortured if expelled are screened by asylum officers.

“The government did not seriously contest that these families face brutal treatment, nor could they, given the overwhelming evidence,” said Lee Gelernt, the ACLU lawyer who argued against Title 42 on Wednesday.