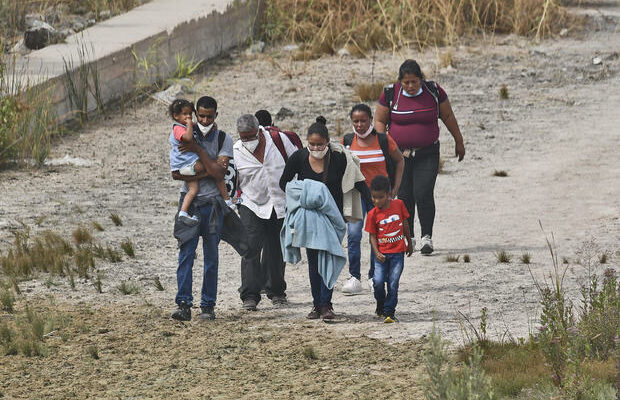 Migrants attempt to cross in to the U.S. from Mexico at the border October 7, 2021 in San Luis, Arizona. Getty Images

The Biden administration on Friday announced its second attempt to end a Trump-era border program that forced migrants to wait in Mexico for their U.S. asylum hearings, issuing a new termination memo it hopes will pass legal muster.

In his memo, Department of Homeland Security Secretary Alejandro Mayorkas conceded the so-called “Remain in Mexico” policy — officially known as the Migrant Protection Protocols, or MPP — likely reduced unauthorized migration to the U.S.-Mexico border during the Trump administration. But he said the program’s humanitarian implications on the tens of thousands of migrants who were returned to Mexico outweighed its deterrence effect.

“I recognize that MPP likely contributed to reduced migratory flows. But it did so by imposing substantial and unjustifiable human costs on the individuals who were exposed to harm while waiting in Mexico,” Mayorkas wrote in his four-page memo.

Mayorkas said the Biden administration can reduce migration to the southern border and provide protection to migrants who qualify for U.S. refuge through other policies, including a fast-tracked immigration court program and a proposed rule that would allow asylum officers to adjudicate applications more expeditiously.

Friday’s move will not have an immediate impact on the U.S. government’s ongoing efforts to implement the court-mandated revival of the Remain in Mexico policy.

The Biden administration, which is currently legally required to take “good faith” steps to restart the Trump-era policy due to an August court ruling, has said it will be ready to enroll asylum-seekers in the program and send them to Mexico in mid-November.

But the U.S. is still trying to convince the Mexican government to agree to accept the return of non-Mexican migrants, senior DHS officials told reporters during a briefing on Thursday.

“Talks with Mexico are ongoing,” one DHS official said. “The ability to reimplement MPP depends on the independent, sovereign decision of Mexico to agree to accept foreigners that the United States seeks to send back to Mexico.”

Mayorkas’ new memo will only take effect if the August court ruling is suspended by the Texas federal judge who issued it or an appellate court. A DHS official said the administration hopes the ruling will be lifted soon, but conceded that there’s no way of knowing when — and if — it will.

“Hopefully soon does not necessarily imply that we mean that it necessarily will be soon,” the official said.

Lawyers representing the government, as well as Texas and Missouri, which filed the lawsuit against the termination of the Remain in Mexico policy, are set to convene on Tuesday to hold oral arguments before the Fifth Circuit Court of Appeals, which is hearing the administration’s appeal of the August ruling.

A senior DHS official said the administration will likely ask the Fifth Circuit to pause the August order or to send the case back to U.S. District Court Judge Matthew Kacsmaryk, an appointee of former President Trump who ordered Remain in Mexico’s reinstatement.

Mayorkas’ directive may alleviate concerns raised by advocates for asylum-seekers, who have accused the Biden administration of not moving quickly enough to publish the new termination memo. They have strongly decried the plans to reinstate Remain in Mexico, calling it illegal and inhumane.

The Trump administration used the MPP to return 70,000 migrants to Mexico, where the returnees found themselves waiting for their U.S. court hearings in squalid tent camps and border towns plagued by cartel violence and crime. Hundreds of migrants reported being kidnapped, extorted or physically assaulted.

To address concerns raised by Mexico, as well as their own reservations about the policy, Biden administration officials have said they are working to establish a version of the Remain in Mexico program that provides a higher degree of due process and safety for asylum-seekers.

The modifications include expanding migrants’ access to lawyers; striving to complete court cases within 180 days; and creating a policy exception for at-risk asylum-seekers, including migrants who identify as members of the LGBTQI community and those whose age or medical conditions make them too vulnerable to be returned to Mexico, DHS officials said.

But a DHS official acknowledged these changes “still do not make the program acceptable from a humanitarian standpoint.” Another official said “no amount of resources can fix” the policy’s “endemic” and “inherent” flaws.

The administration may also face difficulty convincing Pro Bono lawyers to help asylum-seekers returned to Mexico, as many legal services providers have said they will refuse to be “complicit” in the implementation of the Trump-era policy.

On Thursday, the Justice Department, which oversees the nation’s immigration judges, sent a notice to legal services providers asking them to join government contact lists that will be provided to asylum-seekers returned to Mexico, citing an “urgent need” for lawyers, according to an internal email.

The government is planning to use immigration courts in El Paso and San Diego — as well as two tent facilities in Laredo and Brownsville, Texas — to hold asylum hearings for migrants enrolled in the MPP program.

Elissa Steiglich, a co-director of the immigration clinic at the University of Texas School of Law, said her group declined the government’s request to join the legal services contact lists because it did not want to help recreate “the horrors” of Remain in Mexico policy.

“There’s no way to have a fair hearing with an individual who’s trying to assert an asylum case living in northern Mexico, far from counsel and having to provide their testimony in a soft-sided tent,” Steiglich told CBS News.

Mayorkas’ new memo is designed to address concerns raised by Kacsmaryk in his August ruling. Kacsmaryk ruled that Mayorkas’ initial termination memo, issued in June, did not adequately consider Remain in Mexico’s “benefits,” including its deterrence effect on migrants.

The Trump administration argued the policy deterred migrants escaping poverty from journeying to the southern border to file asylum applications that would ultimately not satisfy the legal threshold for U.S. humanitarian refuge.

Kacsmaryk also determined the reversal of the Trump-era border policy led the Biden administration to violate a section of U.S. immigration law that mandates the detention of certain asylum-seekers, since there’s currently not enough detention capacity to detain all of them.

Citing that argument, Kacsmaryk ordered the administration to revive the MPP until it is “lawfully rescinded” and the government has the detention capacity to hold all asylum-seekers and migrants subject to mandatory detention.

A senior DHS official said Kacsmaryk’s second condition is impossible to satisfy, calling it a “novel and unprecedented interpretation” of U.S. law.