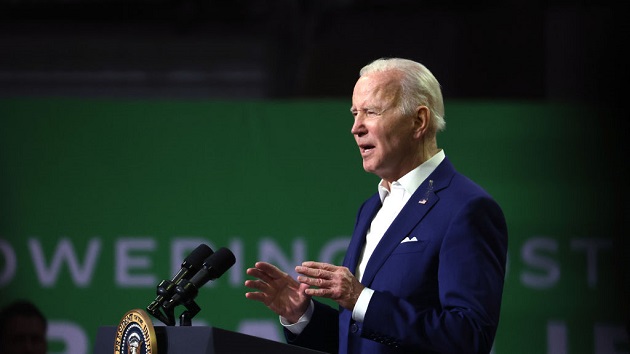 MENLO, IOWA - APRIL 12: U.S. President Joe Biden speaks to guests during a visit to POET Bioprocessing on April 12, 2022 in Menlo, Iowa. Biden announced that he would ease restrictions on ethanol use to help ease soaring gas prices. (Photo by Scott Olson/Getty Images)

(WASHINGTON) — Following a call with Ukraine’s President Volodymyr Zelenskyy, President Joe Biden announced Wednesday his administration is authorizing an additional $800 million for weapons and ammunition for Ukraine, including artillery and armored personnel carriers, as it braces to defend itself from an expected new Russian offensive.

Pentagon press secretary John Kirby walked reporters through the aid package in an afternoon press briefing, saying it includes “new capabilities that we have not provided to Ukraine.”

“We committed from the very beginning even before the invasion, to helping Ukraine be able to defend itself. This is a piece of that. And this is representative of the kinds of capabilities that the Ukrainians themselves have asked for and said they need as this fighting now gets focused on the eastern part of the country,” he said.

“How that gets interpreted by the Russians. you can ask Mr. Putin and the Kremlin,” Kirby added.

Biden announced the $800 million package in an earlier written statement. He also noted that Russia is preparing to focus its invasion in the Donbas region in eastern Ukraine but affirmed the U.S. would continue to “provide Ukraine with the capabilities to defend itself.”

“This new package of assistance will contain many of the highly effective weapons systems we have already provided and new capabilities tailored to the wider assault we expect Russia to launch in eastern Ukraine. These new capabilities include artillery systems, artillery rounds, and armored personnel carriers,” Biden said.

“I have also approved the transfer of additional helicopters. In addition, we continue to facilitate the transfer of significant capabilities from our Allies and partners around the world,” Biden added.

According to the Pentagon, the list of new military hardware includes 155mm howitzer artillery — a specific request from Ukraine — 200 M-113 armored personnel carriers, 100 armored humvees, 300 Switchblade drones, and 11 MI-17 helicopters. The U.S. had given Ukraine five helicopters as part of an earlier shipment.

“And again, the Ukrainians have made it clear that in this fight that’s coming, artillery is a critical need — not just the artillery piece itself, but the rounds that go with it,” Kirby said following Biden’s announcement. “You can see, there’s 40,000 rounds that are going on with this — and we will be in an iterative conversation with them going forward and if they need additional artillery rounds, clearly the United States will do what we can to fill those needs.”

Reiterating the U.S. position not to send U.S. forces to fight in Ukraine, Kirby told reporters, “There will be no U.S. pilots flying the helicopters into Ukraine.”

“Unmanned coastal defense vessels” were also included on the lengthy list of equipment, some of which will require specific training.

The additional aid comes after Biden called Russia’s action’s in Ukraine “genocide” for the first time and as Zelenskyy warns Putin could use chemical weapons in Ukraine.

The U.S. has now given Ukraine more than $3 billion in security assistance.