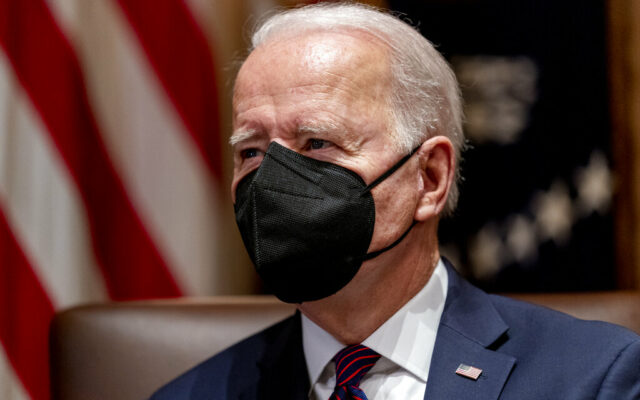 President Joe Biden meets with members of the Infrastructure Implementation Task Force to discuss the Bipartisan Infrastructure Law, in the Cabinet Room of the White House in Washington, Thursday, Jan. 20, 2022. (AP Photo/Andrew Harnik)

While President Biden’s rating decline over the past year has been broad-based, spanning both political and demographic lines, it has been especially pronounced among younger people and independents. Both groups have voted decisively Democratic in recent years — their continued frustration or disappointment would make the party’s tough path to holding Congress all the more difficult. Regaining their support will be key to whether Mr. Biden sees an approval rebound in time for this year’s midterms.

Independents nationwide swung dramatically after 2016, voting for Democratic candidates by double-digit margins in 2018 and 2020, helping deliver the White House to Mr. Biden. But now, just 35% of them approve of his overall job handling — a 24-point drop that’s twice as large as the change among both Democrats and Republicans since the start of his term.

Even independents who voted for Mr. Biden in 2020 have fallen off dramatically. Their approval ratings have decreased by a whopping 31 points — much more than those who cast their vote for Donald Trump. One reason drops have been greater among Biden voters than Trump voters — among independents and more broadly — is simply that Biden voters started out at very high approval levels and had much more room to fall.

But independents in particular have weaker political attachments and change their minds more often than partisans. Independents tend to be less ideological and less attuned to day-to-day or even weekly political developments. That said, Biden has seen sagging numbers with other less partisan, less engaged groups. For example, drops have been twice as large among Americans who aren’t registered to vote than among those who are registered; and twice as large among those who sat out the last presidential election than among 2020 voters. The number-one thing disapproving independents and non-voters say would improve their opinion is reducing inflation.

Another eye-catching group consists of younger Americans, specifically people under 30. They turned out in record numbers in 2018 and 2020, and six in 10 of them voted for Biden. But their approval rating has dropped from 70% in February to just 42% now. This 28-point decline over the year is nearly double the size seen in other age groups, and unlike these older groups, the under-30 group’s ratings have slid even further since November.

Those under 30 who disapprove of Biden’s job handling are more frustrated by his presidency than before — up 9 points since April, a larger jump than we see among older disapprovers — and six in 10 feel disappointed. Disapprovers under 30 are more likely to identify as liberals than their older, more conservative counterparts and seem to be frustrated by different things.

One reason may be that they haven’t seen some of their priorities addressed. Six in 10 say the administration isn’t focusing enough on race relations; half say so for voting rights and access. On passing both Build Back Better and a voting rights bill, most say that it’s at least somewhat important to them. Four in 10 say if each of these things happened, it would improve their opinion of Biden. And a 44% plurality say Mt. Biden is not as liberal as they would like him to be.

That said, when asked what the most important issue facing the country is, Americans under 30 prioritize the same two things as the public at large: the coronavirus outbreak and the economy. Like other Americans, the two things under-30 disapprovers most frequently say would improve their opinion of the president are getting inflation down and improvement in the coronavirus situation.

This CBS News/YouGov survey was conducted with a nationally representative sample of 2,094 U.S. adult residents interviewed between January 12-14, 2022. The sample was weighted according to gender, age, race, and education based on the U.S. Census American Community Survey and Current Population Survey, as well as to 2020 presidential vote. The margin of error is ±2.5 points.