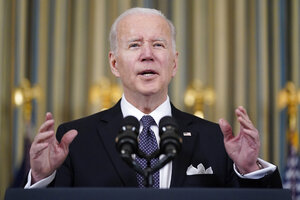 WASHINGTON (AP) — President Joe Biden’s $5.8 trillion budget for next year would trim federal deficits and boost taxes on the wealthiest Americans. Both could appeal to Sen. Joe Manchin amid Democratic hopes of reviving talks with him over the party’s derailed social and environment plan.

The question is whether this time, the pivotal West Virginia Democrat can be wooed to craft a scaled-down version of his party’s roughly $2 trillion, 10-year package. Before Christmas, Manchin sank that plan, which had already passed the House, saying it would fuel inflation and deepen deficits.

Biden and his aides touted his budget, unveiled Monday, as focusing on fiscal responsibility, security at home and overseas and investments in social programs to help families afford housing, child care, health care and other costs.

Another highlight: $2.5 trillion in tax increases over 10 years on the highest-income people and corporations. That included $361 billion from a minimum 20% tax on families worth $100 million or more — the top one-hundredth of 1% of earners — though it drew some criticism from Manchin.

“An unprecedented commitment to building an economy where everyone has a chance to succeed. A plan to pay for those investments that we need as a nation,” Biden described his budget to reporters.

Senate Minority Leader Mitch McConnell, R-Ky., said the president’s defense proposal would at best “leave our armed forces simply treading water” because of inflation. He said bigger budgets for agencies like the IRS and the Environmental Protection Agency were “bloated liberal nonsense.” And he labeled Biden’s $2.5 trillion, 10-year tax boosts, which the president said would only affect the nation’s highest earners, a“ bomb of tax hikes.”

McConnell’s critique was no surprise. Presidents’ budgets are habitually ignored or reworked by Congress and mocked by the opposition party, a moment that lets both sides draw battle lines useful in upcoming elections.

But Biden’s budget can also be viewed as a step toward luring Manchin, probably the Senate’s most conservative Democrat, back to the bargaining table. Manchin on Monday downplayed reports that he’s resumed talks with top Democrats over a new plan.

“No, there’s nothing serious going on there,” he told reporters Monday. But he also said any new package should be completed by early summer because the fall congressional campaigns could make progress later too hard.

While much of Biden’s budget was similar to last year’s, it was also a more centrist repackaging that reshaped some of its emphasis in Manchin’s direction.

Its proposed $795 billion for defense includes an increase for the Pentagon and a plan to help law enforcement hire more officers and improve training. “The answer is not to defund our police departments,” Biden told reporters, a pointed rebuke of a rallying cry embraced by some progressives but disavowed by nearly all Democrats.

Its stream of new revenue helps Biden assert that his plan would reduce deficits by over $1 trillion over the coming decade — a goal that wasn’t emphasized last year. Just over two-thirds of the deficit cuts would come in the plan’s final five years, though, postponing the most painful reductions and suggesting they might never happen.

The new revenue would also be used to lower costs for families, Biden said, as Democrats confront the nation’s bout with inflation that’s become a major political liability.

“He remains seriously concerned about the financial status of our country and believes fighting inflation by restoring fairness to our tax system and paying down our national debt must be our first priority,” his spokesperson, Sam Runyon, said Monday.

Manchin, chairman of the Senate Energy and Natural Resources Committee, has repeatedly said he wants any new package to focus on domestic energy independence. He also wants an “all of the above” policy that combats climate change but helps all forms of energy.

Representing a state that relies heavily on coal and energy production, Manchin and his position have gained political clout because of Russia’s invasion of Ukraine.

“What Russia has put out has to be replaced,” he said, referring to the U.S. cutoff of that country’s oil imports.

Of the House-approved $2 trillion bill, $555 billion was for tax breaks and other initiatives for encouraging a switch to cleaner energy. At Manchin’s insistence, that bill dropped the original plan’s biggest effort to do that by offering financial rewards or penalties for energy producers.

Manchin has also voiced support for including provisions lowering the costs of prescription drugs. The earlier bill would have done that by strengthening the government’s ability to negotiate the prices it pays for some pharmaceuticals it purchases, which would save the government money.

Nonetheless, the White House kept some details to itself of what it might offer Manchin in talks.

Budget documents said it was including some revenue proposals like prescription drug pricing in a “deficit neutral reserve fund.” It was not providing details “because discussions with Congress continue,” the documents said in a footnote.

“There’s other ways for people to pay their fair share,” he said.

A somewhat similar tax on billionaires last year by Senate Finance Committee Chairman Ron Wyden, D-Ore., never made the final package. And last year’s House-passed bill already had around $2 trillion in savings, suggesting new proposals may not be needed.

Democrats will need all their votes in the 50-50 Senate because all Republicans seem certain to oppose whatever they produce. Vice President Kamala Harris would cast the tiebreaking vote.