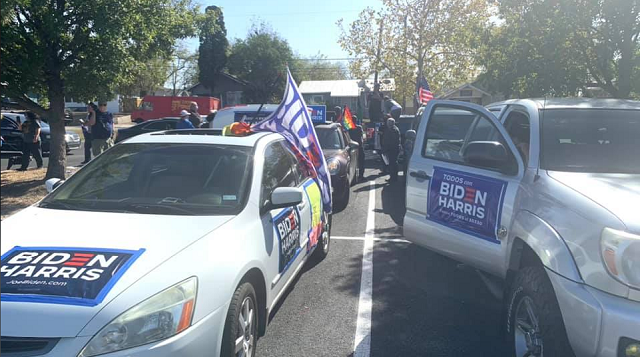 SAN ANTONIO (KTSA News) – A Ridin’ with Biden caravan took a victory lap from Pittman-Sullivan Park in the city’s East Side to Hardberger Park in the Northwest Sunday afternoon.

Meanwhile, about a thousand supporters of Donald Trump gathered at Cowboys Dance Hall in the Northeast Side for a rally before taking off on a Drive for 45.  They’re not convinced that Trump lost the election.

“No, I’m not giving up.  Hell no, I’ll never give up,” said Jerad Thornell. “We still have a chance.  I think there’s a lot of fraud going on”

Heidi Larkin was riding a truck with a 2nd Amendment flag and several others displayed in the bed of the pickup.

“We’re here to let people know that we’re not falling for a fraud election and it’s about stopping the steal,” she said.

Edward Niño is one of the organizers of the Alamo City Trump  Train.  He told KTSA News they had planned to stop meeting after the election, but the movement is growing.  Niño says the Trump supporters enjoy getting together with others who share their beliefs and political views.

“If you come out to one of these events, you’ll see love and patriotism.  It’s a great experience,” said Niño.