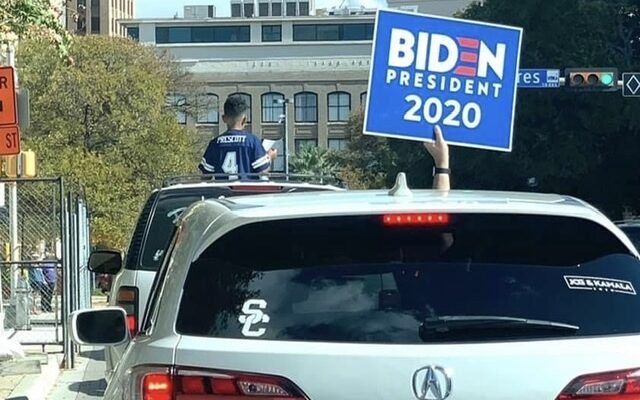 SAN ANTONIO (KTSA News) – Like Spurs fans after a championship victory, Joe Biden supporters got in their vehicles and drove downtown for a honk parade Saturday after his presidential win.

Pedestrians led the way, starting at the downtown UTSA campus. Dozens held signs and cheered when the caravan drove past Travis Park.  The crowd included Heather Gentry and her family. Her 4-year-old son held up a sign that read ,”San Antonio for Biden-Harris.”

Gentry, who’s 28-years-old, said this is the first election that she’s been actively involved in.  She participated in rallies and Black Lives Matter protests this past summer.

“It was more than a hashtag to me,” Gentry told KTSA News. “I mobilized. I talked about the election and urged others to vote.”

She said having the first female vice-president is very important to her, especially because she has a 2-year-old daughter.

“She gets to grow up seeing diverse women in power,” said Gentry.

Jonathan Contreras was wearing a rainbow flag and holding a sign that read, “Left is best.” He believes Biden will fight for the rights of the LGBTQ community.

Meanwhile, hundreds of Trump supporters gathered at Main Plaza in New Braunfels to show support for the President. They say it’s not over. The election is headed to the courts and they believe Trump will be awarded the win.

Cars and trucks adorned with Trump flags and banners circled around Main Plaza as spectators cheered and waved.