Biden says apart from personal behavior, Cuomo did a “hell of a job” as governor 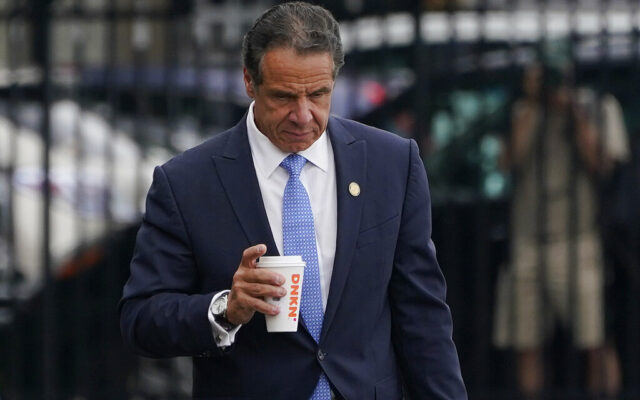 New York Gov. Andrew Cuomo prepares to board a helicopter after announcing his resignation, Tuesday, Aug. 10, 2021, in New York. Cuomo says he will resign over a barrage of sexual harassment allegations. The three-term Democratic governor's decision, which will take effect in two weeks, was announced Tuesday as momentum built in the Legislature to remove him by impeachment. (AP Photo/Seth Wenig)
President Biden on Tuesday said outgoing New York Governor Andrew Cuomo has done a “hell of a job” as far as his performance as governor goes, while saying women who make allegations of sexual harassment should be believed. Mr. Biden specifically cited Cuomo’s work on infrastructure and voting rights among a “whole range of things” he believes the governor has done well.

Mr. Biden made the comment Tuesday after saying he respects Cuomo’s decision to resign. The president said last week that Cuomo “should resign,” after an investigation from New York Attorney General Letitia James found he had sexually harassed 11 women, including staffers and people who did not work in his administration. Cuomo has not been criminally charged related to the accusations, although four New York county prosecutors said have asked James’ office for more information.

Mr. Biden distinguished between Cuomo’s alleged conduct and his actions as governor as he took reporters’ questions following remarks on the Senate passage of the bipartisan infrastructure bill, although he also later said he’s “not” separating the two. CBS News senior White House and political correspondent Ed O’Keefe asked the president to assess Cuomo’s more than a decade in the governor’s office.

O’KEEFE: “One of the Democrats through the years that you spoke with about infrastructure the most was Andrew Cuomo, who is resigning, who announced he’s resigning today. You had traveled New York with him when you were vice president to the launch of the reconstruction of LaGuardia. He was someone who supported your campaign early on. I know you called on him to resign. I know you condemned the alleged behavior. But you’re someone who spends a lot of time with mayors and governors. How would you assess his ten-and-a-half years as governor of the state?”

BIDEN: “In terms of his personal behavior or what he’s done as a governor?”

O’KEEFE: “What he’s done as a governor.”

But moments later, when another journalist, CNN’s Kaitlan Collins, asked the president how he could say Cuomo did a “hell of a job” given the sexual harassment claims, the exchange got testy.

COLLINS: “Can I quickly follow up on your comment on Governor Cuomo? Can you really say that he has done a, quote, ‘hell of a job’ if he’s accused of sexual harassing women, on the job?”

BIDEN: “Look, you’re asking two different questions. The substantive, should he remain as governor is one question. And women should be believed when they make accusations that are able to on the face of them make sense, they’re investigated, and the judgement was made that what they said was correct. That’s one thing. The question is, did he do a good job on infrastructure? That was the question. He did.”

COLLINS: “The question was how did he do as a governor?”

O’KEEFE: “How was he as a governor generally?”

BIDEN: “Well as a governor generally—”

BIDEN: “Outside of his personal behavior? Okay.”

COLLINS: “But can you separate the two?”

BIDEN: “No, I’m not. I was asked a specific question. I’m trying to answer specifically. What do you want to ask me specifically?”

White House press secretary Jen Psaki insisted the president initially responded to a question on infrastructure, although the president mentioned voting rights in his initial response as well.

“@POTUS responded to a specific question today about @NYGovCuomo  work on infrastructure,” she responded. “He also made clear it was right for @NYGovCuomo to step down, reiterated his support for women who come forward, and made clear you can’t separate personal behavior from other work.”

Earlier this year, Mr. Biden had said Cuomo should resign if James’ investigation backed up the women’s claims. When the attorney general released her report, the president stood by his earlier assessment.

The sexual harassment claims against Cuomo are not the only ones casting a shadow over his administration. The Cuomo administration has also been accused of obscuring the full scope of nursing home deaths in his state. A law firm selected by the New York Assembly’s Judiciary Committee has been looking into Cuomo’s handling of the COVID-19 in nursing homes.