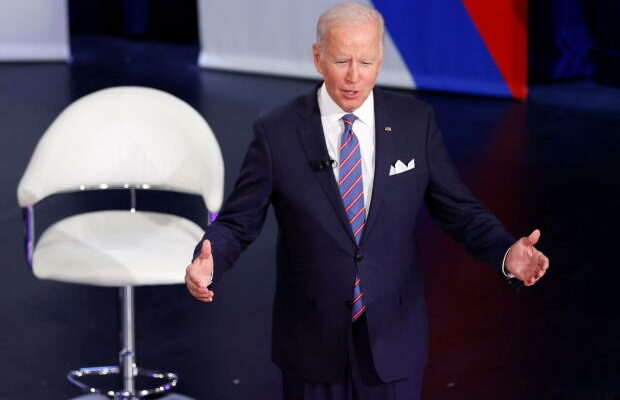 Hong Kong — President Joe Biden said on Thursday that the United States would defend Taiwan if China ever attacked the democratically governed island. The White House quickly walked back his remark as analysts tried to discern whether Mr. Biden might have been signalling a change in Washington’s long-held policy of “strategic ambiguity” over the role the U.S. would play in the event of a military conflict between China and Taiwan.

“Yes, we have a commitment,” the president declared after being asked during a CNN Town Hall in Baltimore, Maryland whether the U.S. would defend Taiwan in the face of an attack by China.

“China, Russia and the rest of the world know we have the most powerful military in the history of the world,” Mr. Biden said. “Don’t worry about whether they [China] are going to be more powerful. What you do have to worry about is whether or not they’re going to engage in activities that will put them in a position where they may make a serious mistake.”

The chances of such a mistake have been rising. This month alone, China sent a record 149 military aircraft into Taiwan’s air defense zone.

Chinese President Xi Jinping said anyone advocating for Taiwan’s independence would be “condemned to history,” while reiterating calls for peaceful unification of Taiwan with China this year — the 100th anniversary of the founding of the Chinese Communist Party.

Beijing has never ruled out the use of military force to unify China with Taiwan, which has been governed independently since Chinese nationalists fled to the island after their loss to the Communists in the 1949 Chinese civil war.

The White House quickly sought to clarify Biden’s remarks, insisting that there had been no change in official U.S. policy on Taiwan.

The Taiwan Relations Act, ratified by the U.S. Congress in 1979, states: “The United States will make available to Taiwan such defense articles and defense services in such quantity as may be necessary to enable Taiwan to maintain a sufficient self-defense capability.”

Over the summer, the Biden administration approved an arms sale package worth $750 million to Taiwan, continuing a four-decade tradition of both Democratic and Republican administrations. The Taiwan Relations Act does not directly state the U.S. is obligated to “defend” Taiwan if China ever attacks, however.

Asked about the remarks, a White House spokesperson told CBS News in a statement that the U.S. relationship with Taiwan continued to be “guided by the Taiwan Relations Act.”

Secretary of Defense Llyod Austin was asked about Mr. Biden’s remarks on Friday while on a trip in Europe.

“No one wants to see cross-[Taiwan] Strait issues come to blows and nobody should,” the defense chief said. “We’ll continue to help Taiwan defend itself as we have done in previous administrations. Won’t engage in hypotheticals.”

President Biden made similar remarks in August, however, about the U.S. having a “sacred commitment” to defend U.S. allies, including Taiwan

Official reaction in Taiwan was muted on Friday, but China issued an expected pushback.

In Beijing, Ministry of Foreign Affairs spokesperson Wang Wenbin urged Washington to “be cautious with its words and actions on the Taiwan issue, and not send any wrong signals to the separatist forces of Taiwan independence, so as not to seriously damage China-U.S. relations and peace and stability in the Taiwan Strait.”

“Whether Biden’s remarks at CNN’s Town Hall yesterday mean traditional and recently emphasized ‘strategic ambiguity’ has been replaced by ‘strategic clarity’ has to be observed further, and any rush conclusion may be wrong and even dangerous,” Shi Yinhong, a professor of international relations at Beijing’s Renmin University, told CBS News. “However, the elements of ‘clarity’ in the ‘strategic ambiguity’ is increasing in the past months by words and deeds, or in the oft-repeated words of the [Biden] administration itself, [U.S.] security cooperation with Taiwan has been deepening.”

Victor Gao, the Vice President of the Center for China and Globalization who served as the official English interpreter for former Chinese leader Deng Xiaoping, agrees that ties between Washington and Taipei appear to be at their warmest in decades.

“Yes, since 1979,” he told CBS News, referencing the year that Washington switched from formally recognizing Taipei as the seat of Chinese government power, to Beijing. “Mainly because in terms of the sales of U.S. weapons, in terms of the lethality, quantity, monetary value and sophistication. In terms of sending U.S. military trainers to Taiwan and several attempts of landing military aircraft or the possibility of sailing U.S. ships into Taiwan’s ports.”

“I don’t think the United States, being the most important military power and leader of the free world, wants to unravel the international security order which dates back to 1945,” Gao added. “Further, I don’t think President Biden means to commit U.S. soldiers to fight for Taiwan. First of all, it would be failure. Second, it would be a complete waste of American blood.”

CBS News’ Pamela Falk, who covers the United Nations, said China’s ambassador to the U.N. had pushed back earlier on Thursday against the U.S.’ growing ties with Taiwan.

“We are not the troublemaker,” insisted Ambassador Zhang Jun. “On the contrary, some countries, the U.S. in particular, is taking dangerous actions leading the situation in Taiwan Straights into a dangerous direction.”