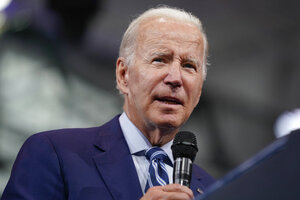 WASHINGTON (AP) — President Joe Biden will mark the 21st anniversary of the 9/11 attacks on Sunday by delivering remarks and laying a wreath at the Pentagon, the White House said Tuesday.

The day will commemorate the 2001 terrorist attacks when hijackers took control of commercial planes in order to use them as missiles, crashing into New York’s World Trade Center, the Pentagon and a Pennsylvania field. Nearly 3,000 people died in the attacks by al-Qaida. The U.S. and its allies responded by launching the Afghanistan war.

Jill Biden, the first lady, will speak Sunday at the Flight 93 National Memorial Observance in Shanksville, Pennsylvania. Vice President Kamala Harris and her husband will go to New York City for a commemoration ceremony at the National September 11th Memorial.