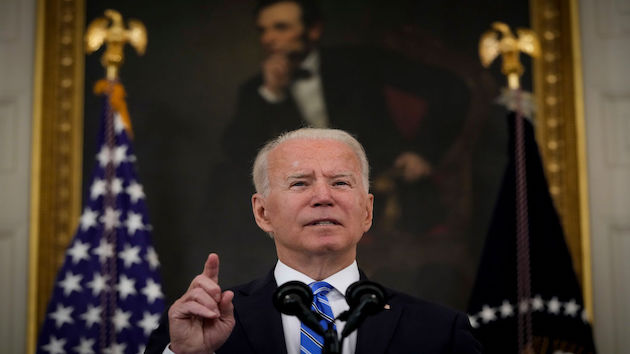 WASHINGTON, DC - JULY 19: U.S. President Joe Biden speaks about the nation's economic recovery amid the COVID-19 pandemic in the State Dining Room of the White House on July 19, 2021 in Washington, DC. Biden also reiterated his hope that Facebook will better police vaccine misinformation on their platform. (Photo by Drew Angerer/Getty Images)

(WASHINGTON) — Days after Facebook publicly rejected President Joe Biden’s message to the platform that it’s “killing people” by allowing the spread of vaccine misinformation, even as COVID-19 infections rise and vaccinations fall around the U.S., he tried to clean up his comment about the social media giant Monday, saying he hopes Facebook doesn’t take it “personally.”

Following remarks on the economy at the White House, a reporter asked about his comment Friday to companies and platforms like Facebook, the president interjected to answer before the reporter could finish.

“Let me say what I said. I’m glad you asked that question,” Biden began. “It was pointed out that Facebook, of all the misinformation, 60% of the misinformation came from 12 individuals. That’s what the article said.”

Biden was referring to research the White House pointed to at a press briefing last week when Surgeon General Vivek Murthy warned in his first advisory of the Biden administration of the threat of misinformation to public health.

Biden continued on Monday by retracing his steps, saying, “I was asked that question about what do I think is happening.”

When pressed if he felt the social media company was doing enough to combat the misinformation, the president said he was unsure, because he wasn’t sure what action they had taken over the weekend.

He then sidestepped when asked how he would hold the company accountable, he replied, “When you say hold accountable, I’m not trying to hold people accountable. I’m trying to make people look at themselves. Look in the mirror. Think about that misinformation going to your son, daughter, your relative, someone you love. That’s all I’m asking.”

Biden was attempting to clean up an answer he gave when leaving the White House for Camp David on Friday afternoon when he was specifically asked, “On COVID misinformation, what’s your message to platforms like Facebook?” and said, “They’re killing people. I mean, it really — look, the only pandemic we have is among the unvaccinated. And they’re killing people.”

The controversial comment came one day after the surgeon general put out a new advisory arguing that misinformation, particularly on social media websites like Facebook, has hindered vaccination efforts, sown mistrust, caused people to reject public health measures, use unproven treatments, prolonged the pandemic and put lives at risk.

Facebook took issue with the description by the president on Friday, saying in a statement that his claim was not true.

“We will not be distracted by accusations which aren’t supported by the facts,” Facebook spokesperson Dani Lever said in a statement to ABC News. “The fact is that more than 2 billion people have viewed authoritative information about COVID-19 and vaccines on Facebook, which is more than any other place on the internet. More than 3.3 million Americans have also used our vaccine finder tool to find out where and how to get a vaccine. The facts show that Facebook is helping save lives. Period.”