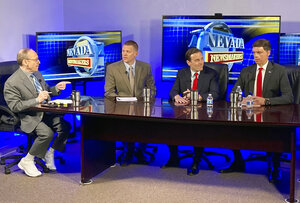 FILE - Republican Senate hopefuls Sam Brown, right, and Adam Laxalt, second from right, prepare for a debate taped for broadcast this week on "Nevada Newsmakers" on May 9, 2022, at a television studio in Reno, Nev. Republicans are pushing an anti-Big Tech message in the midterm campaigns as they look to tap into the resentment toward large technology companies that increasingly courses through their party. (AP Photo/Scott Sonner, File)

RENO, Nev. (AP) — Shortly after launching his campaign last year for the Republican nomination in Nevada’s U.S. Senate race, Sam Brown got into a scrape with Twitter.

A Purple Heart recipient who was severely burned by an IED blast in Afghanistan, Brown posted a picture of himself saluting while in uniform along with the words “Freedom Isn’t Free.” After he filed for the Senate seat three days later, he said his post was flagged with a “potentially sensitive content” warning that would require Twitter users to click or tap on the post to confirm they want to view it.

Twitter explained the restriction by pointing to Brown’s account settings, which the company has said he could adjust. Regardless of what triggered the label, it gave Brown a powerful opportunity to tap into the resentment toward large technology companies that increasingly courses through the Republican Party.

“Either my face, my scars were sensitive or the fact that someone would salute in uniform our American flag or, most likely, this came just a few hours after I filed to run for Senate,” Brown told Fox News at the time. “As a Republican, we’re very used to seeing censorship happen on the Big Tech platforms.”

As the 2022 primary season moves forward next week with contests in several states including Nevada, that sense of persecution is animating the GOP effort to retake control of the Senate.

Brown’s GOP opponent, former state Attorney General Adam Laxalt, frequently knocks “censorship of speech” as “one of the most onerous threats to our free democracy.” In Ohio, Senate Republican nominee JD Vance has warned that Big Tech companies are going to ​“destroy our nation.”

And in his controversial 11-point plan to “rescue” America, Sen. Rick Scott of Florida, who leads the GOP effort to regain the Senate majority, threatens legal action against social media companies that “censor speech and cancel people.”

The GOP offensive comes as Elon Musk has pursued a purchase of Twitter, articulating a philosophy aligned with many Republicans who argue that the social media efforts to blunt misinformation and propaganda have stifled conservatives from expressing their views. He has, for instance, said he would allow Donald Trump to rejoin the platform. The former president’s account was locked after he helped spark the violent insurrection at the U.S. Capitol on Jan 6, 2021.

In recent days, Musk has threatened to walk away from his $44 billion bid to buy Twitter, accusing the company of refusing to give him information about its spam bot and fake accounts. Musk has argued, without providing evidence, that 20% or more are bogus.

For voters confronting inflation, rising gas prices and gun violence, it’s unclear whether concerns about the role of large technology companies will resonate broadly this year. But it feeds a sense of animosity among some of the GOP’s most loyal voters, who remain angry that social media platforms barred the spread of vaccine and election misinformation and that Twitter limited the circulation of stories about Hunter Biden’s laptop before the 2020 election over fears that it was disinformation from Russia. Since then, no evidence has emerged of any Russian connections to the laptop.

​​“Big Tech is just doing what it wants to do and wants to go along with the liberals on taking our country and making this 1984,” 73-year-old former teacher William Holden of Gardnerville, Nevada, said at a Republican Party event in rural Nevada. He was referencing the dystopian novel by George Orwell about a society where “Big Brother is watching you” and the “Thought Police” monitor the ideas in people’s minds.

Despite such sentiment, a recent report by New York University researchers is one of several studies that have found no evidence of political bias dictating content moderation decisions on major platforms. NYU researchers noted that many conservative voices thrive on Facebook, Twitter and YouTube.

Tech insiders in Washington and Silicon Valley remain largely unclear on how exactly Republicans plan to combat disinformation or implement new rules on how social media moderates content if the party succeeds in flipping the U.S. Senate.

“There is a constituency that tracks Elon Musk: contrarian voters who are tired of being bossed by Silicon Valley. But anti-tech rhetoric on the campaign trail or Twitter, no matter how hot it gets, will not magically transform into meaningful public policy outcomes in D.C.,” said Niki Christof, a tech industry veteran and former GOP campaign operative.

Laxalt, the presumptive front-runner in Nevada’s Republican Senate primary, refers to technology companies as agents of the radical ​left and “wokeness,” along with the media, academia and Hollywood.

In April, he told a crowd of supporters gathered at a Las Vegas honky-tonk that Musk’s planned purchase was a “big win” over “radical Big Tech monopolies that have been stifling conservative free speech.”

“To watch all these Twitter employees in their cry rooms because, ‘Oh​,​ my God, Elon Musk has pledged to allow an open, robust debate,’ is really something to behold,” he said.

Beyond Nevada, Republicans in Arizona and Ohio have also adopted Big Tech attacks as rallying cries, even when the candidates themselves have ties to Silicon Valley. In Arizona, Blake Masters, a former venture capitalist now running for the U.S. Senate with Trump’s backing, said Musk’s purchase of Twitter would be a win for both free speech and “election integrity” — a phrase Republicans have used to raise questions about the legitimacy of U.S. elections, specifically Trump’s defeat, despite a coalition of top government and industry officials declaring the 2020 election to be “the most secure in American history.”

“Beyond Elon, we need a suite of new policies, from treating the major social media companies as common carriers to writing a Digital Bill of Rights to requiring transparency and oversight of Google’s search algorithm,” he said in a statement.

In Ohio, Vance, who previously worked in the technology industry, parlayed a question about transgender kids participating in youth sports into an attack on Google, accusing the company of elevating search engine results that call into question traditional gender roles.

“If we don’t go after the Big Tech companies, we might win a battle here and there, but the tech companies are going to destroy our nation and what it is to be a human being in this country,” he said at a GOP debate before he won his primary.

Some veteran Republicans worry the messaging will lead to overreach and a departure from pro-business orthodoxy. Former U.S. Sen. Scott Brown of Massachusetts, who chairs a Big Tech advocacy group called The Competitiveness Coalition, is urging his fellow Republicans to focus on addressing censorship issues instead of resorting to antitrust legislation, which he said would hinder innovation, competition and entrepreneurship.

“You need a scalpel to address those things. You don’t need a sledgehammer,” Brown said.