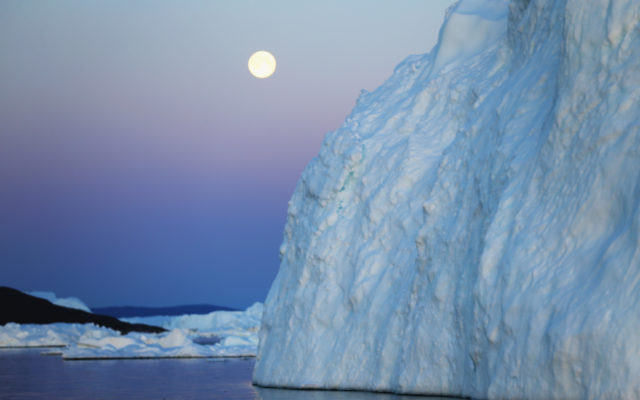 ILULISSAT, GREENLAND - JULY 23: A full moon is seen over an iceberg that broke off from the Jakobshavn Glacier on July 23, 2013 in Ilulissat, Greenland. As the sea levels around the globe rise, researchers affilitated with the National Science Foundation and other organizations are studying the phenomena of the melting glaciers and its long-term ramifications. The warmer temperatures that have had an effect on the glaciers in Greenland also have altered the ways in which the local populace farm, fish, hunt and even travel across land. In recent years, sea level rise in places such as Miami Beach has led to increased street flooding and prompted leaders such as New York City Mayor Michael Bloomberg to propose a $19.5 billion plan to boost the citys capacity to withstand future extreme weather events by, among other things, devising mechanisms to withstand flooding. (Photo by Joe Raedle/Getty Images)

WASHINGTON (AP) — A new NASA study finds a major Greenland glacier that was one of the fastest shrinking ice and snow masses on Earth is growing again.

The Jakobshavn glacier around 2012 was retreating about 1.8 miles (3 kilometers) and thinning nearly 130 feet (almost 40 meters) annually. But the study says it started growing again at about the same rate in the last two years.

Study authors and outside scientists think this is temporary.

Khazendar says the research shows how important ocean temperature is to the retreating and advancing of glaciers. He says long-term climate change means large overall melting.

The study is in Monday’s Nature Geoscience.