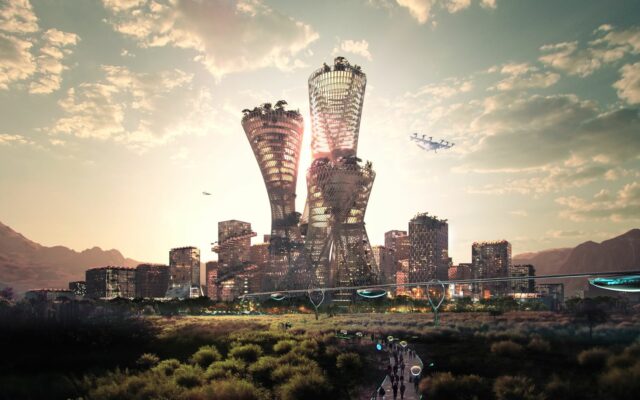 SAN ANTONIO (KTSA News) — Texas is on the shortlist of potential sites for an eco-friendly utopia cooked up in the mind of an American billionaire.

Jet.com founder and former Walmart e-commerce executive Marc Lore announced his vision for Telosa last week, a proposed sustainable city spanning 150,000 acres that would eventually be home to 5 million people. By 2030, Lore plans to start with just 1,500 acres and a diverse group of 50,000 people.

The driving force in his passion behind the idea is the United State’s massive wealth gap.

“Most civilizations in history at some point fall, right?” Lore said in an interview with Bloomberg. “This is going to bring down America.”

The word Telosa is derived from the Ancient Greek word meaning “highest purpose.” Lore said Telosa would include everyone from doctors and lawyers to teachers and baristas, and that “residents would come for jobs, education, and a new way of life.”

They believed that no individual could reach their full potential unless they lived within a strong, cohesive society. This was achieved by both the individual and community working together to create new opportunities to prosper while ensuring that basic social needs were met.

“We’re trying Telosa,” Lore said. “We’re trying this new model for society. Others need to try other models, other ideas. We need to take risks, we need to go back to the fundamental roots of what it means to be an American.”

The new model for society cited by Lore comes from the concept of how the land is managed. In Telosa, any citizen would be able to build homes and sell them, but the city itself would maintain ownership of the land below the structures.

The plan by Lore is to create a higher quality of life for people living in the fully sustainable city with autonomous cars, high-speed transportation, energy-efficient buildings and diverse housing in a 15-minute commute that allows residents to get to work, school, and all destinations in a quarter of an hour.

If you really want to go after a moonshot — you have to start with a big, bold vision, you need to raise the required capital, and surround yourself with the very best people in the world. If you get those three things right you can do incredible, magical things.

“I’m trying to create a new model for society, where wealth is created in a fair way,” Lore explained to Fortune.com. “It’s not burdening the wealthy; it’s not increasing taxes. It is simply giving back to the citizens and the people the wealth that they helped create.”

Lore believes the land would grow in value over time and predicts that as the city grows, so would returns from investments that would be used to “ensure that every citizen – no matter their income – had equal access to healthcare, good schools, parks, safe streets, and transportation.”

The billionaire calls it ‘equitism,’ or a twist on capitalism. Despite being the mind behind the project, Lore would not be the head honcho over Telosa, instead he said it would be “people-centric” and built on values of openness, fairness and inclusivity.

“The cities of the future are going to need companies like Archer [Aviation],” Lore said. “We need disrupters, we need companies that are thinking about how to disrupt the current status quo.”

Lore is a key investor in Archer Aviation, an electric air taxi startup firm that is aiming to create an aircraft that can carry four passengers up to 60 miles at speeds up to 150 mph. The taxi will take off like a helicopter and fly like an airplane.

Lore has plans to utilize connections with private investors, philanthropists, federal and state grants and subsidies for economic development to fun Telosa on top of an estimated $500 billion from his own pockets including expected returns from his own startup investments like Archer.

Other locations being considered are Utah, Nevada, Idaho, Arizona, and Appalachia.