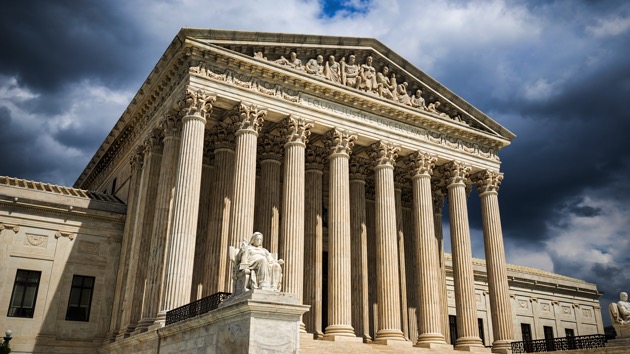 (WASHINGTON) — The death of Supreme Court Justice Ruth Bader Ginsburg has ignited a bare-knuckle debate over her replacement. Democrats and Republicans are exchanging accusations of hypocrisy as they sling prior statements made on Senate confirmation hearings across the aisle.

“Some — some — few on that side will at least have the dignity of putting their head down and plowing through it because they know there is no reason — no reason, no argument, no logic — to justify flipping your position 180 degrees and calling it some kind of principle. It is not. It is utterly craven, an exercise in raw political power and nothing — nothing more,” Schumer said in his remarks on the Senate floor on Monday.

Since Ginsburg’s death on Friday, McConnell and many of his Republican Senate colleagues have beaten the drum for a swift confirmation hearing for whoever Trump picks to occupy the vacancy left by the Supreme Court’s most veteran liberal justice and fortify the panel’s conservative wing.

Some GOP senators are remaining mum, waiting to see who Trump names, what the nominee’s record turns up and what the hearings reveal before they agree to a speedy vote.

Democrats, assuming that Joe Biden will win the Nov. 3 election, counter that a new Supreme Court justice confirmation hearing should be postponed until after the presidential inauguration to give voters a say in the process. If Trump prevails at the polls, then the subject of when a confirmation hearing is held becomes moot.

With the Republicans maintaining a 53-47 majority in the Senate, Democrats cling to fraying threads of hope they can still sway four Republicans to block the Supreme Court nomination and prevent Vice President Mike Pence from casting the deciding vote. But they were dealt with what appears to be a fait accompli on Tuesday when Sen. Mitt Romney, R-Utah — who voted earlier this year to convict Trump during his impeachment trial — said he supports holding a hearing for the president’s Supreme Court pick.

The two sides have resorted to publicly shaming the other, trading accusations of perpetuating a double standard, with statements made in 2016 when McConnell refused to allow a Senate hearing for appellate Judge Merrick Garland, who President Barack Obama nominated to fill the Supreme Court seat of conservative Justice Antonin Scalia, who died nearly nine months before the presidential election.

At the time, the roles of the parties were reversed with most Senate Democrats calling for a hearing and with the bulk of Republicans, who occupied the majority of the chamber then as they do now, successfully thwarting Garland’s bid to serve on the highest court in the land.

Here is what some key players in the Senate from both sides of the aisle said then and now:

– Sen. Mitch McConnell, R-Ky., and then-Senate Judiciary Committee Chairman Sen. Chuck Grassley, R-Iowa, penned a 2016 op-ed in the Washington Post, arguing against a Supreme Court nominee hearing in an election year, saying the American voters should “decide who they trust to both lead the country and nominate the next Supreme Court justice.” On Monday, McConnell said there is “sufficient time” with six weeks to go before the election for a hearing on a nominee, and said the late Justice John Paul Stevens was confirmed in just 19 days, former Justice Sandra Day O’Connor was confirmed in 33 days and Ginsburg was confirmed in 42 days. “Americans re-elected our majority in 2016 and expanded it in 2018 because we pledged to work with President Trump and support his agenda, particularly his outstanding appointments to the federal judiciary,” McConnell said in a statement issued on the day Ginsburg died. “Once again, we will keep our promise.”

– Sen. Chuck Grassley, R-Iowa, in 2016 called for a hearing on Garland’s nomination “so Senators and the public can get a deeper sense of Judge Garland’s views and experience.” But in a speech on the Senate floor Monday, he said, “Our Republican colleagues in the Senate should follow the rule they set in 2016: Not to consider a Supreme Court justice in an election year.”

– Sen. Chuck Schumer, D-N.Y., in 2016 called for a hearing on Garland’s nomination “so Senators and the public can get a deeper sense of Judge Garland’s views and experience.” But in a speech on the Senate floor Monday, he said, “Our Republican colleagues in the Senate should follow the rule they set in 2016: Not to consider a Supreme Court justice in an election year.”

– Sen. Lindsey Graham, R-S.C., the current chair of the Senate Judiciary Committee, supported blocking Garland’s confirmation hearing in 2016, saying at the time, “I want you to use my words against me. If there’s a Republican president in 2016 and a vacancy occurs in the last year of the first term, you can say Lindsey Graham said, ‘Let’s let the next president, whoever it might be, make that nomination

Now Graham says he supports Trump “in any effort to move forward regarding the recent vacancy created by the passing of Justice Ginsburg.” He explained that he changed his opinion for two reasons: former Senate Majority Leader Harry Reid’s 2013 decision to replace the 60-vote rule in Senate confirmations with a simple majority vote, and because “Schumer and his friends in the liberal media conspired to destroy the life of Brett Kavanaugh and hold that Supreme Court seat open.”

Kavanaugh was confirmed to the Supreme Court in 2018 with a 50-48 vote after enduring a grueling confirmation hearing in which he was accused of sexually assaulting a high school classmate in 1982.

– Sen. Dianne Feinstein, D-Calif., the ranking member of the Senate Judiciary Committee, also fought in 2016 to have a hearing for Garland, saying at the time: “President Obama fulfilled his constitutional duty by nominating Judge Merrick Garland to the Supreme Court. Now it’s time for the Senate to do its own job and fully and fairly consider this nominee.”

Feinstein now says that when she made her statement on Garland, the nation was 237 days from electing its next president. “To jam through a lifetime appointment to the country’s highest court — particularly to replace an icon like Justice Ginsburg — would be the height of hypocrisy,” Feinstein said in a statement released shortly after Ginsburg’s death on Friday.

– Sen. Ted Cruz, R-Texas, a member of the Senate Judiciary Committee, was among the first senators to call for a hearing for President Trump’s pending nominee. During an interview on ABC’s This Week, Cruz told ABC News chief anchor George Stephanopoulos that the nation cannot afford to have a short-handed high court with a possible contested presidential election just weeks away.

While he was a candidate for the Republican presidential nomination in 2016, Cruz released a statement, saying, “I proudly stand with my Republican colleagues in our shared belief — our advice and consent — that we should not vote on any nominee until the next president is sworn into office.”

– Sen. Amy Klobuchar, D-Minn., a member of the Senate Judiciary Committee, also supported holding a confirmation hearing for Garland back in 2016, saying at the time, “The Constitution is clear: the Senate must consider the president’s nominee and then choose whether to vote ‘yes’ or ‘no.’ We must do our job, hold hearings, and vote.”

In an interview on ABC’s Good Morning America on Sunday, Klobuchar challenged her Republican colleagues to “look into their souls and look at what they said back then, and justice must prevail.”

“As Joe Biden said, the American People should decide this, who their president is and the president should pick the nominee,” she said.

– Sen. Thom Tillis, R-N.C., a member of the Senate Judiciary Committee, said in a 2016 statement that while Obama was entitled to nominate Garland to the Supreme Court, “the Senate has made it clear it will be exercising its Constitutional authority to withhold consent of the nomination.”

“Rather than drag the nation into a bitter, partisan fight over a confirmation process that will never come to pass, I hope President Obama will use his final months in office to work across the aisle with Congress to produce meaningful solutions that create new opportunities for hardworking Americans,” Tillis said at the time.

Now, he says he supports Trump nominating a “well-qualified and conservative jurist,” adding that if Biden is elected he will nominate someone “who will legislate radical, left-wing policies from the bench.”