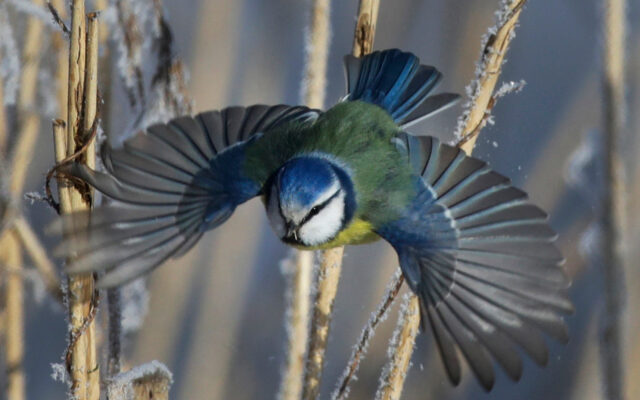 FILE- In this Feb. 26, 2018, file photo, a blue tit flies among dried plants covered with hoarfrost near the Belarus village of Dukora, some 40 km (25 miles) southeast of Minsk. A study published Monday, April 16, 2018, in the Proceedings of the National Academy of Sciences gives the first global look at a worsening timing problem. For example in the Netherlands, the Eurasian sparrow hawk has been late for dinner because its prey, the blue tit, over 16 years has arrived almost six days earlier than the hawk. (AP Photo/Sergei Grits, File)

SAN ANTONIO (KTSA News) — Most people who drive on IH-10 on the Northwest side probably think the seemingly endless road construction is for the birds…but now they’re being told one major project is being put on hold because of some.

The Highway 87 bridge that crosses I-10 in Boerne was supposed to be torn down back in April.

But heavy rainstorms postponed the project until May….when there was another weather delay.

Crews were prepared to take down the bridge this coming weekend but on Wednesday, the city of Boerne put out a notification that even though sunshine and warm temperatures are in the forecast, the project is being delayed again.

It seems some migratory birds have built a nest under the bridge, grounding the demolition project until further notice.

The city didn’t schedule a new date for the bridge removal.