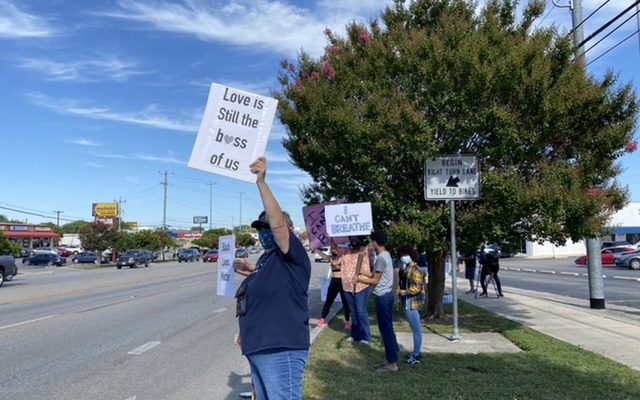 SAN ANTONIO ( KTSA News) – Josie Herrera, a recent graduate of Samuel Clemens High School in Schertz, says she hasn’t suffered the injustices that others have, but she can’t sit idly by. Herrera and her cousins decided to stage a peaceful protest in support of Black Lives Matter Friday in Universal City.

She posted a flyer on social media and about 50 people showed up for the event Friday afternoon on a  sidewalk along Pat Booker Road in front of the Texas Department of Public Safety building.

The death of George Floyd at the hands of a Minneapolis police officer on Memorial Day sparked outrage and protests across the country.

“it’s not just what happened to him. This  has been going on for decades in our country,” she said.

Cynthia Huddleston, a military veteran and a grandmother showed up with her walking cane and poster that read, “Love is Still the Boss of Us.” Huddleston said she didn’t know who was organizing the protest, but she knew it was in support of Black Lives Matter and she wanted to join the call for racial justice.

She also was upset that a community advisory from Universal City officials informing people about the protest said that “residents should stay at home during this time if possible.”  She told KTSA News that after reading the advisory, she was more determined than ever  to attend the peaceful event.

“I don’t think that sends the right message about what kind of people are running my city. A lot of people around here are veterans and the military is the most egalitarian system I’ve ever worked under. The message from the city is just not right,” she said.

Huddleston said she and her husband just wanted to exercise their right to freedom of speech.

The small crowd remained on the sidewalk and did not try to stop traffic on Pat Booker Road. Several drivers honked their car horns and waved or gave the protesters a thumbs up.