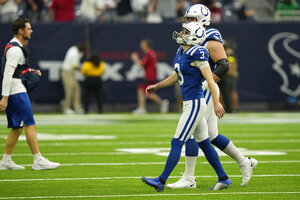 INDIANAPOLIS (AP) — Rodrigo Blankenship’s three-year run with the Indianapolis Colts ended Tuesday when he was waived two days after slicing a 42-yard field goal to the right in overtime and sending two fourth-quarter kickoffs out of bounds.

The Colts wound up settling for a 20-20 tie at Houston — the franchise’s first in 40 years.

Blankenship will be replaced by either Chase McLaughlin or Lucas Havrisik on Sunday in Jacksonville The two kickers were signed to the practice squad and will spend this week fighting for the job Blankenship lost.

“I always tell our players and specialists it’s OK — everyone is expected to make a mistake,” special teams coordinator Bubba Ventrone said Tuesday before the move was announced. “You’re going to have ups and downs in a game. It’s how fast can you respond and how fast can you self-correct it.”

The bespectacled Blankenship won’t get that chance — at least with the Colts.

He won the kicking job as an undrafted rookie out of Georgia in 2020, but after scoring 139 points in a strong rookie season, Blankenship struggled.

He hurt his hip before last year’s game at Baltimore and the ensuing kicking woes that day proved costly in an overtime loss. Blankenship never returned to the field afterward, missing three of 14 field-goal attempts and an extra point in five games before finishing the season on injured reserve.

Michael Badgley had the job for the rest of 2021, going 18 of 21 on field goals and making all 39 extra points. But Indy didn’t re-sign him in the offseason and Badgley instead wound up in Jacksonville. He was eventually cut and re-signed to the practice squad.

Blankenship then fended off a training camp challenge from undrafted rookie Jake Verity, who spent most of last season on Baltimore’s practice squad.

“To Rod’s credit, as we’ve brought the heat and brought competition, he’s kind of won those battles. That’s to his credit,” coach Frank Reich said Monday before meeting with general manager Chris Ballard. “Chris and I will sit down and have a long discussion about that and see where we’re at.”

Blankenship’s victory didn’t last long and now, for the third time in four seasons, Indy’s placekicking job has been in flux.

Blankenship temporarily solidified matters in 2020. But his continued struggles, especially after he was handed kickoff duties following the loss of longtime punter, holder and kickoff specialist Rigoberto Sanchez in training camp led to a change. Sanchez tore his Achilles tendon and will miss the rest of the season.

McLaughlin replaced Vinatieri at the end of 2019 and made five of six field goals and all 11 extra points in four games. Havrisik is an undrafted rookie out of Arizona, who tried out with the Colts during May’s rookie minicamp.