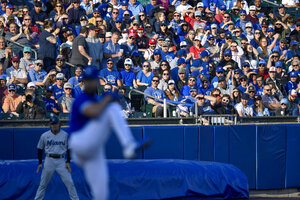 The Toronto Blue Jays will be extending their stay at their adopted home in Buffalo, New York, through July 21.

The team previously was committed to playing in Buffalo through July 4.

The extension comes as the Blue Jays on Monday announced the release of their next batch of tickets for sale this week. The team is making tickets available for a 10-game homestand from June 24 to July 4 as well as a six-game homestand — a pair of three-game series against Texas and Boston — immediately following the All-Star break.

The Blue Jays are back at their Triple-A affiliate’s home in Buffalo for a second season after being prevented from playing home games in Toronto because of Canadian border restrictions caused by coronavirus pandemic. Toronto spent the first two months of this season at its spring training facility in Dunedin, Florida, before relocating to Buffalo last week.

Team President Mark Shapiro hasn’t ruled out the possibility of the Blue Jays returning to Toronto this season while cautioning the decision would hinge on whether Canada relaxes border restrictions.

The Canadian border is closed to nonessential travel, and anyone allowed entry is required to isolate for 14 days upon arrival.

Shapiro last week declined to get into specifics regarding talks between the Blue Jays and Canadian health officials. He says the discussions have become more frequent and “certainly more positive” in recent weeks.

The Blue Jays have not played in Toronto since closing the 2019 season with an 8-3 win over Tampa Bay on Sept. 29.

On Sunday, Canadian health officials provided the NHL an exemption in allowing cross-border travel for teams in the Stanley Cup playoff semifinals.

When in Canada, teams will be required to stay in a bubble and be tested daily for COVID-19, similar to the tight restrictions that allowed the NHL to complete its playoffs in two hub cities last year. Teams will be assigned designated hotels and have no interaction with the public.

The NHL regular season was limited to inter-division play only and featured no cross-border travel, with the league establishing a North Division made up of its seven Canadian franchises.

The Blue Jays also said they have received approval from state and local health officials to allow for 80% capacity — more than 13,000 fans — at Sahlen Field starting June 24, with 95% of those seats reserved for those fully vaccinated. The Blue Jays were limited to 35% capacity for their first week in Buffalo, with the number increasing to 45% for their three-game series against the New York Yankees next week.