Boerne mayor: Coronavirus ‘not a game’, H-E-B is not Fiesta Texas; help for small business coming 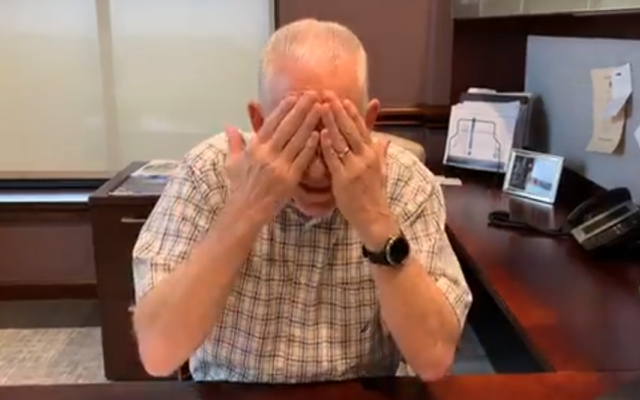 CONVERSE, Tex. (KTSA News) — No, coronavirus is not a game.  And no, H-E-B is not your amusement park.

Those were just two of the many points Boerne Mayor Tim Handren made during his Facebook Live unscripted chat Monday morning about the status of the COVID-19 novel coronavirus in his city and in Kendall County.

“There’s some people who, frankly, still don’t believe this is real — which I don’t get.  I don’t understand how you can not see this is real.  I suppose nobody landed on the moon either.  I don’t know,” Handren lamented live on social media from his office.  “I see this as very real.  For this extreme group that thinks this is not real or it’s an impingement on your personal rights.  No.  This is what we are trying to solve as a collective.  The world is trying solve this problem and the only solution is social distancing.”

The city mayor said he did not want to take the steps other cities like San Antonio have to order people to stay home.

“That becomes extreme,” Handren explained.  “I haven’t gone that far in Boerne because I want to believe people will do the right thing.”

The Boerne city government had to take steps after getting reports of people not following safe distancing practices.

“You know why we had to it? Because people were abusing it and people were going there in large groups — the very thing we said don’t do,” the mayor said.  “And we saw a lot of people exhibiting careless, reckless behavior in my opinion.  And we had a conversation about it Friday and so we said we are going to shut it down because we are not going to create that risk, that temptation for people to be bad.  That’s why we shut it down.”

Handren called those who ignore the rules and best practices “completely irresponsible, completely unaccountable and selfish.”

“I got plenty of emails over the weekend from folks saying, ‘It looks like people think the grocery stores are their new Fiesta Texas,'” Handren relayed in the live video. “They’re going crazy at home and a husband and a wife and one, two, three, four kids are piling in the car and going to the grocery store almost like it’s a field trip. You’ve got to stop that.”

He threatened to ramp up restrictions in the city of Boerne if people continue to using essential businesses as a source of amusement.

“I don’t want to take the next step and make a declaration and force that only two at a time, maximum, can go to H-E-B or Walmart or somewhere else.  That feels rather punitive, I don’t want to go that far.  Folks, you have to sit up and listen to what’s going on,” the mayor said. “It’s not a game.  I’m not asking this to be a ‘let’s see how many people we can get tickets to and arrest.’  You are frankly taking our law enforcement’s time away from more important things.”

Handren said he has daily meetings with city staff every morning — including the weekends — to get the latest updates on the coronavirus situation.  He said he is using the data made available to him and to the public to make decisions on what restrictions need to be in place.

“I know this sucks.  It sucks for all of us.  It sucks for me.  This is not really ‘fun’ for me to get on and have to deliver messages about this topic, to learn the things I’ve had to learn.  I know it’s not fun.”

Even the weekend entertainment wasn’t that great.

“If you are watching Tiger King, good for you,” he opined. “I watched a couple episodes of it this weekend.  Uhhhh, I don’t know if I’m going to watch more.  It’s a strange show.”

Handren did some reading over the weekend.  He read through the entire federal stimulus package.

“It’s 880 pages long.  I think I read almost every page this weekend.  I hope you did your homework.”

While saying he is not your business adviser, the Boerne mayor said the bill is a great opportunity for small businesses to get help from the government to help them stay open.

Small businesses will be able to get SBA loans based on the company’s recent payroll.

“Two and a half times — that’s going to give you eight weeks of coverage for your current payroll so you can keep your current people on your payroll and pay them,” Handren explained.  “You can also use some of that money to pay your rent and pay your utility cost.  That’s what the two and a half — the 0.5 — is going to allow you to do.”

While it is called a loan, the mayor said it will act more like a grant and will be forgiven.

“What that means is you will fill out a form that says I used all of the money I got from this SBA loan.  I paid those expenses,” the mayor detailed. “You fill out that form and you are going to give that to your local banker [who you got the loan from] and they are going to say, ‘Yep, you sure did. Forgiven.’ And you don’t have to pay it back.”

The bank will then go to the federal government to get reimbursed.