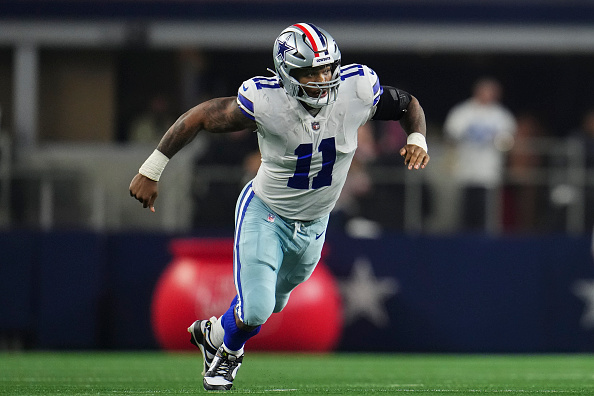 It’s just more of a sideshow, in Parsons’ view, compared to the bigger plot of who moves on to the NFC championship game.

“We’re going to put on a show of being the best players we can be and dominate in that fashion,” Parsons said. “He’s going to do his thing, I’m going to do my thing and what he does is no factor to what I do. My goal is the Super Bowl, bro.”

Same with NFL sacks leader Bosa and the 49ers (14-4), who beat Parsons and company in the wild-card round last season and went on to lose the NFC title game to the Super Bowl champion Los Angeles Rams.

The Cowboys (13-5) are trying to get that far for the first time since winning the last of the franchise’s five Super Bowl titles 27 years ago.

“If you get three sacks and you lose and he might have one sack but he wins, what does it matter what my three sacks do?” Parsons asked. “I’m going home and he’s living on a dream, you know what I’m saying? What he does is no motivation. This is a ‘we’ game, so my team has to beat him.”

Even though they won’t be on the field together, the meeting Sunday night showcases two of the best young pass rushers in the league.

Parsons was with Bosa on the short list of NFL Defensive Player of the Year candidates before Bosa became the overwhelming favorite, finishing with five more sacks than Parsons at 18 1/2.

“It’s insane the level he’s playing at,” 49ers linebacker Fred Warner said. “Knowing that he’s on the field and has that opportunity to get home, you get stickier in coverage and you’re able to sit on routes. He’s just been playing out of his mind.”

Each was the NFL Defensive Rookie of the Year as a first-round draft pick, starting with Bosa two years before Parsons in 2019. Bosa was a No. 2 overall pick while Parsons went 12th in 2021.

Both players move around plenty, the difference being the bigger Bosa (6-foot-4, 266 pounds) mostly switching sides while staying on the defensive line.

The 6-3, 245-pound Parsons was drafted as a linebacker and still plays on the second level, but has lined up more and more as a pass rusher as his skills in affecting the quarterback became clearer.

“Different players, but both players, incredibly valuable to their team,” Dallas defensive coordinator Dan Quinn said. “Both of them you’d love to have and go because both of them can really bring it.”

Bosa had half a sack a year ago before sustaining a concussion late in the first half as the 49ers went on to drop Dak Prescott five times in a 23-17 victory.

The 25-year-old doesn’t remember much about last season’s game because of the concussion, but Prescott’s four-TD showing without an interception in a 31-14 wild-card win over Tampa Bay — with a rushing TD to boot — is fresh on his mind.

“He kind of does it anywhere,” Bosa said of Prescott’s pocket presence. “He’s a big creator down the field after that, so that’ll be a big focus this week.”

Parsons will be chasing Brock Purdy in the rookie’s seventh career start, including last weekend’s 41-23 wild-card victory over Seattle.

After injuries to season-opening starter Trey Lance and veteran Jimmy Garoppolo, Purdy calmly kept alive a San Francisco winning streak that is now up to 11. Having versatile playmakers such as running back Christian McCaffrey and receiver Deebo Samuel has helped.

“I’m a fan of Purdy,” Parsons said. “I think he came in and did everything the right way. He prepared like he was going to be a starter and when his time came, he’s shown a great light.

“He might have surprised some people early on into thinking, ‘No rookie is going to come in and beat us,’ and he’s taken them this far. Super excited to go against him to see what he’s got.”

Bosa went without a sack in a playoff game for the first time against the Seahawks after recording eight in his first six postseason appearances. Parsons’ first in the playoffs came against Tom Brady.

They can’t line up against each other, but Bosa and Parsons can compare themselves to each other. Dallas owner/general manager Jerry Jones believes they probably are.

When he was closer to the NFL lead in sacks during the season, Parsons questioned why quarterbacks seemed to dominate the MVP conversation.

Now that Parsons will have to settle for Bosa likely winning the more realistic honor of best defensive player, Jones sees the playoff game as a proving ground for Dallas’ star defender.

“When I look at a combination of attributes of a player, I think Micah has no problem psyching himself up to a rage,” Jones said. “He lives that way and plays those kinds of — not games, but mental incentives.”

Maybe it’s all part of the show.