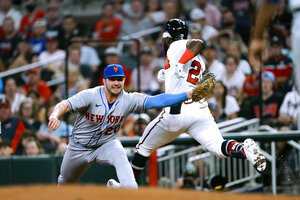 Atlanta Braves' Michael Harris II (23) is put out at first base by New York Mets first baseman Pete Alonso (20) on a ground ball during the fourth inning of a baseball game Monday, Aug. 15, 2022, in Atlanta. (AP Photo/John Bazemore)

ATLANTA (AP) — Hey, Braves fans, hope you like the core of your team.

You’re gonna be cheering them on for a while.

The reigning World Series champions have moved aggressively to lock up their most vital players to long-term contracts.

Rookie sensation Michael Harris II is the latest to plant his roots in Atlanta, agreeing to an eight-year deal worth at least $72 million just 71 games into his big league career.

Harris, only 21 and the youngest player in the majors, could make $102 million over the next decade if the Braves pick up a pair of option years in 2031 and ’32.

Not too far for the Braves, who have taken an aggressive approach when it comes to locking down players with lengthy deals long before they’re eligible for free agency.

All-Star third baseman Austin Riley, who was already under team control for three more years, agreed to a $212 million, 10-year contract that could keep him with the Braves through 2032.

That became the richest deal in team history, surpassing the $168 million, eight-year pact that Matt Olson signed in March after the Braves cut ties with Freddie Freeman and pulled off a blockbuster trade with the Oakland A’s to acquire another slugging first baseman.

Albies is committed to the Braves for another five years — at just $7 million per season — if the team picks up a pair of option years in a deal he agreed to in 2019, before he was even eligible for arbitration.

Acuña followed a similar path less than two weeks after Albies’ contract was signed, signing a $100 million, eight-year deal after a brilliant debut campaign that earned him NL Rookie of the Year honors. The Braves have a pair of team options attached to that contract, as well, which could keep Acuña in Atlanta through 2028 for an additional $34 million.

To recap, that means five key members of Atlanta’s lineup are all under contract through at least 2027.

In fact, virtually the entire roster has a contract for next season or is under team control, setting the team up for the sort of consistent success that marked their record run of 14 straight division titles in the 1990s and early 2000s.

This generation of Braves has claimed four straight NL East titles and is trying to chase down the division-leading New York Mets.

General manager Alex Anthopoulos took a bit of a jab at another Atlanta team, the NFL Falcons, while discussing his franchise’s philosophy.

“The No. 1 thing I worry about is being sustainable,” Anthopoulos said. “When I first got to Atlanta, I listened to talk radio and tried to get a feel for the city, the market. I remember seeing Mercedes-Benz (Stadium, the home of the Falcons) half-empty midway through a season and the Atlanta Falcons were playing in the Super Bowl two years earlier. It was eye-opening to me.”

The only potential stumbling block to the Braves’ stability is shortstop Dansby Swanson, who can become a free agent after the season.

Anthopoulos said the team is hopeful of bringing him back, but wouldn’t go into specifics over whether a deal might be in the works.

Speaking of deals, the Braves have clearly flourished since receiving hundreds of millions in public funds for a new suburban stadium that opened in 2017, along with an adjoining, team-owned development of condos, offices, hotels, bars and restaurants known as The Battery.

Team owner Liberty Media reported revenue of $260 million in the second quarter, an increase of more than 20% over the same period a year earlier. The team’s first World Series title since 1995 also has provided a significant financial boost, with the Braves on pace to surpass 3 million in attendance for the first time since 2000.

Flush with money, the team has jumped at the chance to pursue deals that provide advantages for both sides.

The player gets more money up front, during the years before arbitration when they’re basically forced to play at or just above the league minimum of $700,000.

Harris, for example, will make $5 million each of the next two years, when he would not have been eligible for arbitration. That rises to $8 million for 2025 and ‘26, and $9 million the following year, which covers his three-year arbitration cycle.

But this contract — as with those previous deals — becomes extremely favorable to the team if Harris lives up to the potential he has shown in the first three months of his career. He is hitting .287 with 12 homers, 39 RBIs and 13 stolen bases while providing stellar defense in center field.

That’s a big financial commitment by the Braves, of course, but they’ll have no regrets if Harris turns out to be a big star.

Neither will Harris, a native of metro Atlanta who grew up a Braves fan. He was willing to potentially leave a lot of money on the table for the chance to remain in his hometown for another decade.

“It’s a life-changing moment,” Harris said. “For me to be so young, and for the Braves to even consider me to be part of this organization for that long, it’s a blessing and something I can’t really put into words.”