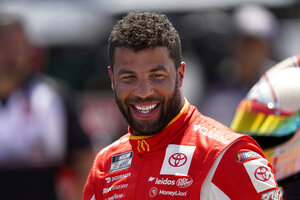 Bubba Wallace and 23XI Racing announced a multiyear contract extension Friday ahead of Wallace’s final push to earn a spot in NASCAR’s playoffs.

The Cup team owned by Denny Hamlin and Michael Jordan launched in late 2020 built around Wallace, the only Black driver competing at NASCAR’s top level. The team expanded this season to add a second car, with veteran Kurt Busch as Wallace’s teammate.

“It feels great to get this renewal done and to know I have a home at 23XI Racing,” Wallace said. “Thanks to M.J. and Denny for continuing to believe in me. We’ve come a long way together in less than two years and we’ve checked off some major goals along the way. We know we still have work to do, both on and off the race track, but I feel good about our team and the direction we’re heading.”

Wallace is coming off the first pole of his career at Michigan International Speedway. But he came up one spot short of the playoff-clinching victory he needs to earn one of the 16 spots in NASCAR’s championship field.

His runner-up finish last week gave Wallace four consecutive finishes of eighth or better, and he heads into Sunday’s race at Richmond Raceway ranked 19th in the Cup standings. A victory in any of the remaining three regular-season races would put Wallace into the playoffs.

“Bubba was a key part of the early stages of 23XI, and I am thrilled that he will continue with the team,” Hamlin said. “When we announced Bubba as our first driver, the goal was to help him take his career to a higher level, and we have done just that. Bubba is continuing to get more competitive each week. We’re excited to see his growth as he and the team work toward achieving our goals.”

Wallace gave the organization its first Cup victory last fall with a win at Talladega Superspeedway in the No. 23 Toyota.

He also has been a key figure in diversity, equity and inclusion efforts with both 23I Racing and NASCAR to help grow the fanbase. Wallace has worked on initiatives such as “Bubba’s Block Party,” which launched Thursday night at Richmond Raceway and aims to bring NASCAR to a younger, more diverse audience. His “Live to be Different Foundation” allows Wallace to engage with the Charlotte-area community through backpack drives and the “Knowledge is Power Program” brings students to race tracks across the country.

Additionally, Wallace’s clothing design collaborations with both McDonald’s and Columbia Sportswear Company have brought NASCAR to a new audience.