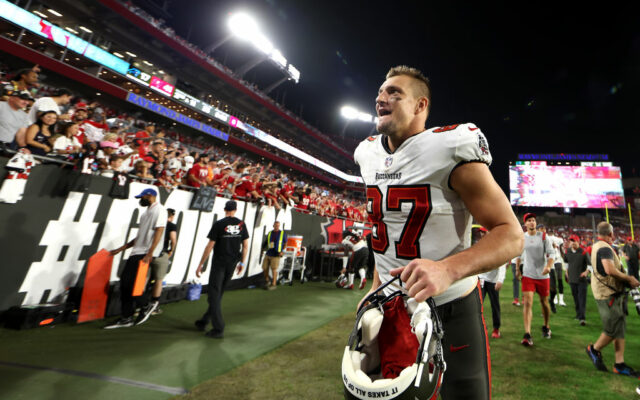 TAMPA, FLORIDA - JANUARY 09: Rob Gronkowski #87 of the Tampa Bay Buccaneers walks off the field after defeating the Carolina Panthers at Raymond James Stadium on January 09, 2022 in Tampa, Florida. (Photo by Mike Ehrmann/Getty Images)
Tampa Bay Buccaneers tight end Rob “Gronk” Gronkowski announced Tuesday he will retire from the NFL for the second time. The former New England Patriot also briefly left the NFL three years ago before coming out of retirement to join quarterback Tom Brady and the Florida team.

“I will now be going back into my retirement home, walking away from football again with my head held high knowing I gave it everything I had, good or bad, every time I stepped out on the field,” he wrote in a statement on Twitter on Tuesday. “The friendships and relationships I have made will last forever, and I appreciate every single one of my teammates and coaches for giving everything they had as well.”

Gronkowski initially left the NFL in 2019. In an interview with “CBS Sunday Morning” at the time, he said, “I just wasn’t feeling like myself anymore.”

“That’s basically the main reason,” he said then. “The lifestyle caught up to me, and I was just fighting my way through the last two years. It wasn’t enjoyable anymore. I just knew that’s when it’s time to go – and walk away.”

In 2020, Brady signed a contract with Tampa Bay after leaving the Patriots. Shortly thereafter, Gronkowski, who was retired, joined his former quarterback in Florida.

In his Tuesday post, Gronkowski shared that in college, he was asked to write about his dream job. He said he chose a professional football player for the Tampa Bay Buccaneers “for many reasons, the sunny weather being #1.”

“I completely forgot about writing this report until 2 years ago when I had the opportunity to join the Tampa Bay Buccaneers,” he said. “And let me tell ya, the journey in Tampa over the last 2 years has blown away what I originally wrote about in college, big time.”

Gronkowski thanked the organization “for an amazing ride, trusting me to come back to play and help build a championship team.”

The 33-year-old has won four Super Bowl titles over the span of his career, three with the Patriots and one with the Buccaneers. He’s also a five-time Pro Bowler.

Earlier this year, Brady announced his retirement after more than two decades in the NFL. However, just over a month later, he said he was returning to Tampa Bay for the upcoming season. The seven-time Super Bowl champion has already signed a deal with Fox Sports for his retirement from the NFL, whenever that may be.

While it’s not clear what Gronkowski will do now, he concluded his Tuesday statement with: “Cheers to what’s next, maybe sailing the seas. Arghhhhhh!!”